On June 24, Senators Tim Scott (R-SC) and Cory Booker (D-NJ) and Representative Karen Bass (D-CA), the top negotiators on police reform, released a statement on the status of negotiations saying they have come to an agreement on “a framework addressing the major issues for bipartisan police reform”.  The statement went on to say that there is still more work to be done and “nothing is agreed to until everything is agreed to”.  This statement was made on the eve of the Senate adjourning for a two-week July 4th recess. The House adjourned for recess a week later.

While Senators Scott and Booker and Representative Bass have agreed to a framework – the issues that will and will not be included in a final reform proposal - no actual language has been agreed to yet.  Staff from both sides have been working throughout the recess in the hopes of having legislative language agreed to before Congress adjourns for August recess.  NAPO continues to be involved in the process from the Republican side, providing our feedback and comments on draft proposals on issues ranging from qualified immunity and Section 242 to training and the use of chokeholds.

Senator Scott continues to stand strong against the elimination of qualified immunity for officers being a part of any agreement.  The negotiators seemed to have agreed to some form of municipal liability instead but are meeting strong resistance from management organizations that have concerns with cities and departments being held liable for officers’ actions without strict parameters on that liability.

We appreciate Senator Scott’s continued hard line against touching qualified immunity for individual officers and continue to press him, the other negotiators, and members of Congress to preserve this legal protection for officers.  We are also working to ensure that no provision of Senator Booker’s June 9 draft proposal is included in the final compromise.  While many consider that proposal dead, we do not agree as Senator Booker remains the lead negotiator for the Democrats in the Senate.  We view the fight against that proposal one we cannot afford to lose.

NAPO is doing everything we can to safeguard the individual rights of officers.  In addition to qualified immunity, we are also working to protect long standing, constitutional good faith legal protections for officers, ensure officer due process is protected, officer privacy and confidentiality rights are guarded, and the rights of law enforcement to bargain over accountability and disciplinary actions is not eroded.

We will continue to be vigilant and remain actively involved with the staff, Senators and Representatives participating in negotiations.

The House Commerce, Justice, Science, and Related Agencies (CJS) Appropriations Subcommittee approved the Fiscal Year 2022 CJS spending bill, which funds the Department of Justice, on July 12.  While the spending measure does include significant funding for NAPO’s priority grant programs, it also attempts to pass provisions of the George Floyd Justice in Policing Act (H.R. 1280) as part of the bill, and it includes seriously concerning preconditions and requirements for state and local agencies to receive grant funding.

The FY 22 CJS Appropriations bill requires state and local governments, as a prerequisite for receiving any FY 22 COPS or Byrne JAG funds, to comply with nine conditions aimed at improving police practices, including eliminating racial profiling and implicit bias; eliminating excessive force and chokeholds; eliminating “no-knock” warrants in drug cases; and eliminating contractual arrangements, including collective bargaining agreements, that prevent investigations of law enforcement misconduct.  Not only does NAPO have serious objections to these provisions, but we also believe that the requirements, which must be met by the FY 22 grant cycle, will effectively “defund” many law enforcement agencies who rely on federal funding.

NAPO sent a letter to House Speaker Nancy Pelosi (D-CA) and Minority Leader Kevin McCarthy (R-CA) outlining our concerns with the FY 22 CJS Appropriations bill and its provisions that attempt to pursue the goals of the partisan George Floyd Justice in Policing Act and attach strings to these programs, particularly the Byrne JAG Program and the COPS Program.  We are urging House leadership to leave police reform policies to those currently negotiating reform legislation and out of the appropriations process.

While House Democrats are moving at breakneck speeds to pass as many FY 22 appropriations measures as possible before the August recess, it seems like the CJS spending bill will not be one of them.  Democrats are planning to bundle seven appropriations bills into a giant spending package that will be brought to the floor for a vote by the end of July.  The package will leave out the remaining five appropriations measures that are the most contentious, including the CJS, Defense, and Homeland Security funding bills.

Congress has a lot on its plate to get done this summer in addition to government spending, including infrastructure, possible police reform, and suspending or increasing the country’s debt limit.  With all of this, it is expected that Congress will pass a short-term continuing resolution prior to the end of the fiscal year on September 30, to fund the government at FY 21 levels.  NAPO will continue to work with Congressional appropriators to ensure that police reform measures included in the House FY 22 CJS appropriations measure are not included in the final spending package.

The Senate passed the Protecting America’s First Responders Act (S. 1511 / H.R. 2936) and the Jaime Zapata and Victor Avila Federal Law Enforcement Protection Act (S. 921) well over a month ago and NAPO is exerting every effort to ensure these two important bills do not get stalled in the House.

The Protecting America’s First Responders Act passed by the Senate by unanimous consent on June 10. This important bill would make it easier for public safety officers disabled in the line of duty to qualify for the Public Safety Officer’s Benefits (PSOB) Program’s disability benefits.  It would also ensure that beneficiaries receive the highest award amount possible and it will make certain that all children of public safety officers disabled or killed in the line of duty are able to benefit from the Public Safety Officers’ Education Assistance program.

This bill has stalled in the House Judiciary Committee, which does not seem willing to act on any law enforcement-supported legislation until police reform is done. Our only course of action for now is to convince House leadership that the Protecting America’s First Responders Act is an item for the suspension calendar and can be passed without objection.  We are working with the bill’s sponsors, Senator Charles Grassley (R-IA) and Representative Bill Pascrell (D-NJ), and reaching out to members of the House to garner as many bipartisan cosponsors as we can so show there is strong support for this legislation.  There are currently 17 bipartisan cosponsors to the bill and we are aiming to surpass the 44 cosponsors this legislation had last Congress.  We are also continuing to talk with Judiciary Committee staff on the significance of this bill to the first responder community.

The House Judiciary Committee has indicated its support for the bill, but much like the Protecting America’s First Responders Act, it is not interested in moving the bill until police reform is enacted. We are working with the bill’s sponsors, Senators John Cornyn (R-TX) and Chris Coons (D-DE), and House leadership to find a path forward for this bipartisan legislation.

Senator Charles Grassley (R-IA) reintroduced NAPO-supported legislation, the Stop the Importation and Manufacturing of Synthetic Analogues (SIMSA) Act, which would combat the manufacturing and importation of fentanyl from countries such as China and Mexico.

Illegal drug traffickers and importers can circumvent the current scheduling of drugs by minutely changing the formula of a synthetic drug, creating a new substance that is technically lawful, but still highly dangerous and deadly. The SIMSA Act would create an additional schedule – Schedule A – to the Controlled Substances Act to address substances that are significantly similar in chemical composition to and just as addictive and unsafe to the human body as already controlled substances. It would also allow the Attorney General to temporarily or permanently add a drug that meets certain criteria to Schedule A, allowing the government to quickly respond and control these synthetic analogues.

This nation is experiencing a significant drug crisis, which threatens the future of our youth and our country as a whole.  According to the National Institute on Drug Abuse, 70,630 Americans died from drug overdoses in 2019 and opioids were involved in over 49,860 of those deaths, a significant increase in opioid-related overdose deaths over previous years. Many of these deaths were from using synthetic analogues of fentanyl.  By allowing these drugs to be quickly added to the Controlled Substances Act and establishing penalties for illegally importing and exporting a Schedule A substance, the SIMSA Act would significantly help law enforcement in their efforts to stop the trafficking and importation of these drugs into the country.

Another key component to law enforcement’s fight against opioids entering our communities is increased penalties for domestic trafficking of fentanyl and synthetic analogues.  While the SIMSA Act does not address this, NAPO looks forward to working with Senator Grassley to ensure law enforcement is given every tool available to deter and address the spread of this epidemic.

Lending to Heroes
Most Trusted Lender to Law Enforcement

Coalition Against Bigger Trucks
Protecting Our Public & Our Police Officers 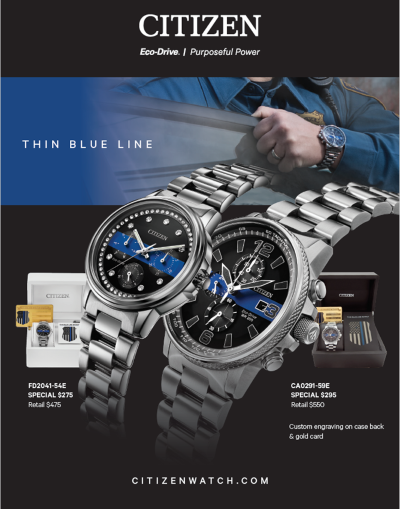 EDUCATIONAL OFFERINGS & TUITION DISCOUNTS FOR THE MEMBERSHIP of NAPO

Lindenwood University is offering the Membership of NAPO educational discounts of $80.00 per credit hour ($240.00 per 3 credit hour class) for their online Undergraduate and Graduate degrees.  In addition to this terrific discount, Lindenwood University offers the opportunity to transfer up to 27 credits from an accredited Police Training Academy, as well as review any additional college transfer credits from past colleges and universities.  In an effort to learn how to best to serve and support the NAPO membership, Lindenwood has asked our members to complete a 3-minute survey.  This survey will also allow Lindenwood to better understand how education is valued by the NAPO membership, it’s officers and staff.

Please access the survey at the following link:  3 minute survey

In appreciation for participation, Lindenwood is offering multiple participants

to be selected to win $25 Amazon Gift Cards. 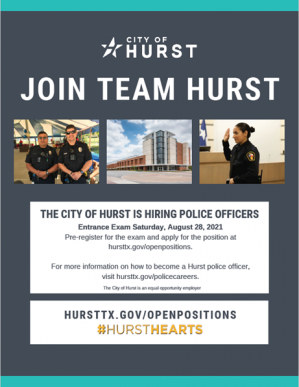 •   A person who is 45 years of age or older may not be certified for a beginning position in the Police Dept.

• High school diploma or GED and completion of 60 hours from an accredited school, college or     university with a grade point average of 2.0 or better.

•   Must be licensable by the Texas Commission on Law Enforcement

•   Valid Texas Driver's License (or able to obtain one)

Starting Annual Salary:
$72,925 increasing to $79,850 at completion of probationary period.

The City of Hurst is an Equal Opportunity Employer