NAPO’s Executive Director, Bill Johnson, participated in a Labor & Management Roundtable Discussion in Philadelphia on November 20, 2014.  Law enforcement leadership from across the country participated in the meeting, which included the following individuals:

The following topics were covered during the discussion:

If you have any questions about this discussion, please contact Bill Johnson at:  bjohnson@napo.org.

Over the past week, NAPO’s Executive Director, Bill Johnson, has been interviewed on policies related to recent incidents in Ferguson, Missouri.  Johnson continues to emphasize the importance of considering Officer Wilson’s due process rights.

Johnson’s interview on The Sean Hannity Show is available at the following site:

Also, please find Johnson’s interview with Voice of America at the following site:

If you have any questions about these interviews, please contact Bill Johnson at:  bjohnson@napo.org.

On November 22, 2014, NAPO signed on as a supporter of Congressman Erik Paulsen’s (R-MN) “Don’t Tax Our Fallen Public Safety Heroes Act,” a companion bill to Senate legislation, which was endorsed by NAPO.  The Senate bill passed the Senate without opposition on September 18, 2014.

On November 20, 2014, NAPO met with Congressman Kevin Brady’s (R-TX) staff to discuss the Equal Treatment of Public Servants Act of 2014 (H.R. 5697), which Congressman Brady introduced with Congressman Richard Neal (D-MA) on November 13, 2014.  This legislation would repeal the Windfall Elimination Provision (WEP), and correct Social Security benefits for public servants.  The main tenets of the legislation are as follows:

On November 20, 2014, NAPO met with a senior staffer for Congressman Joe Crowley (D-NY).  NAPO used the meeting to outline the following pieces of legislation:

James Zadroga 9/11 Health and Compensation Reauthorization Act:  NAPO expressed appreciation for the Congressman’s support of the James Zadroga 9/11 Health and Compensation Reauthorization Act.  The Zadroga bill’s two critical programs providing medical treatment and compensation for 9/11 heroes – the World Trade Center Health Program and the September 11th Victim Compensation Fund – are set to expire in October 2015 and October 2016 respectively. This legislation would continue these programs for 25 more years, through 2041.

NAPO appreciated the opportunity to meet with the staffer, and we look forward to continuing to work with Congressman Crowley and his staff in the future.  If you have any questions about any of the bills summarized above, please contact Melissa Nee at:  mnee@napo.org.

On November 19, 2014, NAPO participated in a teleconference, led by staffers for Senator John Cornyn (R-TX) and Congressman Ted Poe (R-TX), to discuss strategies to move the Justice for Victims of Trafficking Act forward.  This legislation, sponsored by Senator Cornyn and Congressman Poe, was passed by the House in May 2014 and by the Senate Judiciary Committee as an amendment in September 2014.  This legislation will boost support for and protection of victims of human trafficking by increasing law enforcement resources, enhancing victims’ services, and increasing penalties in an effort to combat child sex trafficking, child pornography, sexual exploitation, and human trafficking.

NAPO has worked closely with senior staffers for Senator Cornyn and Congressman Poe to advance this bill, and plans to use the remaining days of this Congress to continue to pursue the passage of this bill.

On November 20, 2014, NAPO met with senior advisors at the Office of National Drug Control Policy (ONDCP).  A component of the Executive Office of the President, ONDCP was created by the Anti-Drug Abuse Act of 1988.  ONDCP advises the President on drug-control issues, coordinates drug-control activities and related funding across the Federal government, and produces the annual National Drug Control Strategy, which outlines Administration efforts to reduce illicit drug use, manufacturing and trafficking, drug-related crime and violence, and drug-related health consequences.

NAPO appreciated the opportunity to meet with senior advisors at ONDCP, and looks forward to continuing to work with the office in the future.  If you have any questions about this meeting, please contact Melissa Nee at:  mnee@napo.org.

NAPO has met with Congressman Culberson’s staff in the past to discuss our top priorities, and we plan to continue to engage the Congressman and his staff to ensure our priorities remain at the topic of the agenda.  If you have any questions about this the CJS Subcommittee, please contact Melissa Nee at:  mnee@napo.org.

On November 20, 2014, President Obama announced a series of executive actions to grant work permits and temporary reprieves from deportation to as many as five million undocumented immigrants.  NAPO continues to closely study this issue, as we understand the concerns our members have voiced in regard to federal government immigration policy, especially our members in the Southwest region.

We will keep our members updated on this issue, including any forthcoming Congressional actions.  If you have any questions about this issue, please contact Bill Johnson at:  bjohnson@napo.org.

House Democrats voted on November 18th to reinstate their full slate of leaders in the 114th Congress.

With secret ballots, the full caucus selected Minority Leader Nancy Pelosi of California to serve her eighth-straight term at the very top of the House Democratic Caucus power structure.

Caucus Chairman Xavier Becerra of California and Vice-Chairman Joseph Crowley of New York will each serve another two years in their current roles. Unless another position opens up at the table in the 115th Congress, it could be Becerra’s last term in leadership: He is term-limited at the end of 2016.

Crowley, meanwhile, has more years ahead of him if he serves out this second term as vice-chairman and then runs to succeed Becerra as chairman.

NAPO will continue to keep our members updated as strategies and positions develop for the 114th Congress.  If you have any questions about the leadership positions listed above, please contact Melissa Nee at:  mnee@napo.org. 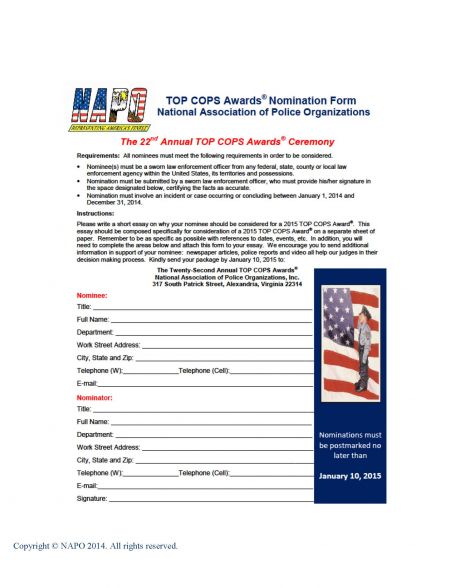