In significant victory for NAPO and our members, Congress repealed the “Cadillac Tax”, the 40 percent excise tax on employer-sponsored health plans, as part of the Fiscal 2020 appropriations agreement (H.R. 1865).  NAPO pressed Congressional leaders to support the inclusion of the Cadillac Tax repeal as part of any year-end, must pass legislative package. We applaud Congress for finally listening to us, to employers, workers, health plans and employee organizations who have been calling for the repeal of the tax since 2015 and we thank them for protecting public safety employees' hard-earned health benefits.

The Cadillac Tax was not just a tax on health plans; it was a loss of earned wages and benefits. Over the years, law enforcement officers through collective bargaining have often given up pay increases in order to secure better health care coverage. Under the excise tax, they were being penalized for entering into those good faith agreements with their employing jurisdictions. If the Cadillac Tax was allowed to be implemented, it would force public safety employees to pay the tax in the form of wage cuts, higher premiums, increased out-of-pocket costs, and lower benefits.

The repeal of the Cadillac Tax ensures public safety employees can maintain affordable, full coverage healthcare for themselves and their families.

In a victory for NAPO, the House passed the Restoring Tax Fairness for States and Localities Act (H.R. 5377) by a vote of 218-206. This bill would temporarily eliminate the cap on the state and local tax (SALT) deduction for tax years 2020 and 2021.  The bill also includes the language of the Supporting America’s First Responders Act, which reinstates above-the-line itemized deductions for work-related out-of-pocket expenses for first responders. NAPO worked with Congressman Bill Pascrell (D-NJ) and House Ways and Means Committee staff on this legislation and we believe this is a significant step forward to lowering the tax burdens on first responders.

The Tax Cuts and Jobs Act, passed by Congress in December 2017, allows taxpayers to deduct their state and local property, income and sales taxes up to a combined $10,000 limit. The $10,000 cap is not indexed to inflation, so it will lose its value over the years.  While this is not a total

elimination of the SALT deduction – which NAPO strongly opposed – with the cap, citizens of states with high state and local taxes such as New York, New Jersey, California and Illinois, have found themselves on the wrong end of a tax hike.

Further, prior to the passage of the Tax Cuts and Jobs Act, law enforcement officers were able to offset these substantial costs by deducting them from their taxable income. The elimination of these itemized deductions put an unfair financial burden on officers, who give up so much to protect and serve our communities. This bill would allow first responders to claim deductions for out-of-pocket expenses related to uniform purchases and maintenance as well as job-related training.

NAPO thanks Ways and Means Committee Chairman Richard Neal (D-MA), Congressman Pascrell, and Congressman Tom Suozzi (D-NY) for their leadership on this issue and we look forward to working with them to see this bill enacted into law. 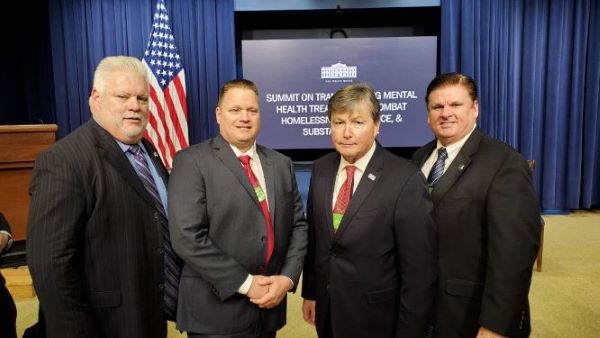 They heard from a panel on the need for reform, featuring mental health and substance abuse experts and advocates, followed by a discussion led by the Department of Health and Human Services Secretary Alex Azar.  Panels on the need for State and Community Reform and the Federal Leader Perspective followed and rounded out the Summit. The federal perspective panel consisted of the Director of the Office of National Drug Control Policy Jim Carroll, Department of Housing and Urban Development Secretary Ben Carson, Assistant to the President Kellyanne Conway, and Office of Justice Programs (DOJ) Principal Deputy Assistant Attorney General Katie Sullivan.

President Trump addressed the attendees and expressed his full support for finding a way to take address the issues surrounding mental health and its impact on the criminal justice system and communities.  He indicated his Administration is ready to dedicate significant resources to transform how this nation addresses mental health.

Transforming mental health treatment, particularly in regard to how it intersects and impacts the criminal justice system, has long been a priority for NAPO. With decreasing mental health supports and services, an increasing number of people with mental illnesses are coming into contact with the criminal justice system and law enforcement officers are finding themselves on the front lines.  All of this puts incredible strain on public safety as well as state and local budgets and people’s lives.

NAPO appreciates the opportunity to participate in this important discussion and work with the Administration to promote collaboration between federal, state and local criminal justice and mental health systems to improve responses to people with mental illnesses. 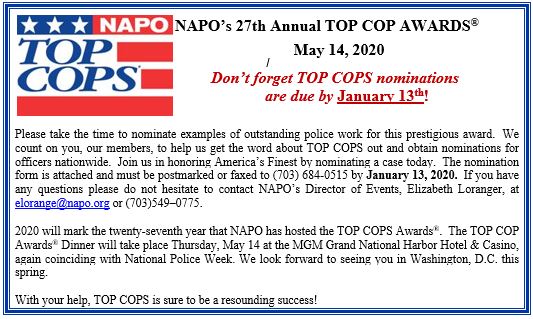 Rep. Malinowski testified in support of the legislation, stating that as the House debates how to ensure every American has access to affordable, comprehensive health coverage, he “hope[s] we can at least agree on a way to free those who choose to risk their lives and their health to protect us” from the anxiety of not having such care.

NAPO believes that the Expanding Health Care Options for Early Retirees Act would help preserve the retirement security and the health of those public servants who selflessly serve and protect our communities. Preserving the retirement security of all our members is a top priority for us.  If  there is any way this bill would negatively impact your ability to negotiate health care for your retirees, please reach out to Andy Edmiston at aedmiston@napo.org.  Also reach out to Andy if you have any questions or would like more information on the legislation.

NAPO’s continued outreach to members of Congress calling for full funding for NAPO’s priority grant programs within the Department of Justice (DOJ) paid off in H.R. 1158. Within the Community Oriented Policing Services (COPS) Office, Congress funded Hiring Program at $235 million, gave $10 million for active shooter training, $46 million for anti-meth and heroin task forces, and $50 million for grants under the STOP School Violence Act. Appropriators also increased funding for the Law Enforcement Mental Health and Wellness Grant Program from $2 million to $5 million for training, peer mentoring and mental health program activities. NAPO has been calling for a dedicated funding stream for peer mentoring programs in the wake of the passage of the Law Enforcement Mental Health and Wellness Act, and while we strongly believe more funding must be dedicated to this programs, we believe this funding increase is another step forward in ensuring officers get access to mental health and wellness programs.

The Mentally Ill Offender Treatment and Crime Reduction Act (MIOTCRA) was funded at $33 million, illustrating the strong support amongst members of Congress to ensure adequate funding for crisis intervention teams (CIT) and other mental health training for law enforcement.

If you have any questions about the final FY20 spending bill or funding for specific programs, please contact Andy Edmiston at aedmiston@napo.org.

NAPO’s updated “Sponsor/Cosponsor” spreadsheet is available at the following link: https://www.napo.org/washington-report/sponsor-cosponsor-spreadsheet/. The spreadsheet accompanies the latest “Legislative Positions” document, which is available at the following link: https://www.napo.org/washington-report/legislative-priorities/. NAPO's Legislative Positions is a document that highlights all the legislation that we have taken an official position on or are monitoring during the 116th Congress. It is continually updated to reflect the work we are doing on Capitol Hill.

If you have any questions about any of the legislation that NAPO is currently working, please contact Andy Edmiston at: aedmiston@napo.org.

Don’t miss out on your chance to join NAPO for our 32nd Annual Police, Fire, EMS & Municipal Employee Pension & Benefits Seminar to be held at Caesars Palace Hotel and Casino in Las Vegas, Nevada, January 26 – 28, 2020.  Participate in discussions on the pressing topics that are affecting your pension fund and benefits.

Take an active role in improving your fund by registering for this informative seminar.  The Registration Brochure is attached and check out NAPO’s website at www.napo.org/pb20 for the most up-to-date agenda or to register online.

If you have any questions or need additional information please do not hesitate to contact Elizabeth Loranger, NAPO’s Director of Events, at eloranger@napo.org or (703) 549-0775. We look forward to seeing you in Las Vegas!

you in the new year!

Be sure to look out for NAPO’s legislative review of 2019 and 116th Congress Mid-Term Congressional Scorecard in January.