The Administration and the Attorney General are beginning to implement the various aspects of President Biden’s Executive Order on Advancing Effective, Accountable Policing and Criminal Justice Practices to Enhance Public Trust and Public Safety.  During the drafting of the Executive Order, NAPO shared our concerns with what was in the leaked draft with Ambassador Rice and the Domestic Policy Council as well as with The White House Counsel’s Office over several meetings and conversations.  While some of our concerns were addressed in the final order, many remain, particularly concerning how certain provisions will be implemented by the Administration and the Department of Justice.

NAPO sent a letter to Attorney General Merrick Garland, copying the Director of the Domestic Policy Council, Ambassador Susan Rice, outlining concerns we continue to have as well as recommendations for the implementation of certain provisions as they relate to how the order impacts rank-and-file officers.

Much of the details of the provisions of the Executive Order rely on the Attorney General to implement, in consultation with stakeholders, so it is yet to be seen what the full impact of the Order will have on state and local law enforcement. This includes whether agencies will be penalized by the Department of Justice (DOJ) withholding much needed grant funding at a time when the nation is experiencing soaring violent crime rates and agencies are struggling to hire and retain qualified officers. We are concerned that the Executive Order will set up a situation where the DOJ will be managing the hiring, training, deployment, and policy for every state and local agency without allowing for differences to meet local needs and without the resources necessary to implement the significant changes being required.

NAPO supports improving policing practices, accountability with due process, and training in law enforcement, but any policy must take into consideration the concerns and needs of both law enforcement and the communities they serve. A one-size fits all, top-down approach does not work when there are approximately 18,000 law enforcement agencies of all sizes serving large urban areas, suburban municipalities, rural communities, and small towns. NAPO is urging the Attorney General to significantly engage with law enforcement organizations and representatives as he and the Administration work to implement the provisions of the Executive Order.

We will continue to engage in a robust discussion with the Administration on our concerns with the Order and are working to ensure the voices of rank-and-file officers are heard as it is being implemented.

NAPO opposed and successfully lobbied against an amendment to the National Defense Authorization Act (NDAA) for Fiscal 2023 (H.R. 7900), offered by Congressman Hank Johnson (D-GA), that would restrict state and local law enforcement’s access to surplus military equipment through the Department of Defense and other federal grant programs.

NAPO sent a letter to every member of the House, including leadership, advising them of our strong opposition to amending the NDAA to limit state and local law enforcement’s access to this lifesaving equipment and urging them to not consider this amendment.  We were victorious in our efforts as Congressman Johnson, who submits this amendment to the NDAA every year, was forced to withdraw it before it could be considered and voted on. The NDAA passed the House on July 14 by a vote of 329-101.

Programs like the Department of Defense’s 1033 Program have been vital resources in allowing state and local law enforcement acquire items used in search and rescue operations, disaster response, and active shooter situations that they otherwise would not be able to afford. This equipment has not led to the “militarization” of police, but rather has proven to be essential not only in protecting communities against violent criminals, but also in responding to natural disasters, which are unfortunately increasing in frequency.

Given that state and local law enforcement are our nation’s first responders to incidents from foreign and domestic terrorism to active shooter situations to flood rescues, Congress should be ensuring law enforcement agencies are able to acquire such equipment for the protection of their communities, not limiting it.

While NAPO will continue to fight protect against statutory changes to the 1033 program, we must also work with the Administration and the Law Enforcement Equipment Working Group reestablished under President Biden’s police reform executive order to protect our ability to acquire and purchase surplus equipment through the 1033 program and similar programs.

On July 15, when the Social Security Fairness Act (H.R. 82) hit the requisite 290 cosponsors, Congressman Rodney Davis (R-IL), the bill’s sponsor, filed a motion to add the bill to the consensus calendar, which requires that House Speaker Nancy Pelosi (D-CA) bring the bill up for a vote as-is after 25 legislative days.  That will have the bill being voted on before the November midterm elections. The consensus calendar was established in response to rank-and-file members’ frustration that legislation with significant, broad bipartisan support could languish in Committee without any action.  In order to get on the consensus calendar, the bill must have 290 cosponsors and must not have been reported by the Committee of jurisdiction (in this case, the Ways and Means Committee).

The Social Security Fairness Act, a long-standing top priority for NAPO, would fully repeal both the Government Pension Offset (GPO) and the Windfall Elimination Provision (WEP). Law enforcement officers and public employees across the country are concerned about their retirement security and the impact of the GPO and WEP. Nine out of ten public employees affected by the GPO lose their entire spousal benefit, even though their spouses paid into Social Security for many years. The WEP causes hard-working public safety officers to lose the benefits they earned themselves, thus punishing those who selflessly serve and protect our communities.  Instead of receiving their rightfully earned Social Security retirement benefit, their pension heavily offsets it, thus vastly reducing the amount they receive.

The loss of income caused by the GPO and WEP is a financial strain on law enforcement officers and their families, an additional strain that those who spent their careers on the front lines protecting our nation’s communities do not need. By significantly scaling back and reducing Social Security benefits for law enforcement officers, as GPO and WEP do, officers and their families are shut out from even the modest retirement that Social Security benefits can provide.

The Ways and Means Committee could decide to mark up the bill before the 25-day deadline and thus take it off the consensus calendar.  We are working to continue to build up our cosponsor count to make it difficult for House leadership to stall movement of this bill.  Please join us and reach out to your Congressional Representative and urge them to cosponsor the Social Security Fairness Act.  If they are already cosponsors, thank them and ask them to reach out to House leadership in support of bringing this important bill up for a vote.

The Senate version, S. 1302, sponsored by Senator Sherrod Brown (D-OH), has 40 bipartisan cosponsors. If we are able to get the Social Security Fairness Act through the House via the consensus calendar, we will exert every effort to push the Senate to vote on and finally pass this important bill.

If you need any assistance, please contact NAPO’s Director of Governmental Affairs, Andy Edmiston, at (703) 549-0775 or aedmiston@napo.org.

On July 12, the House passed the First Responder Fair Return for Employees on Their Initial Retirement Earned (RETIRE) Act, H.R. 521, by a unanimous vote of 417-0. This bill, sponsored by Representative Gerald Connolly (D-VA), would help federal firefighters, law enforcement officers, Customs and Border Protection officials, and other federal employees with potentially dangerous jobs receive their full retirement benefits if they get hurt while on duty. Currently, federal public safety officers may lose their early retirement benefits if they are injured on the job, even if they return to federal service in another position.

This bill will ensure that those who choose to serve their country as federal public safety officers maintain their earned retirement benefits if disabled in the line of duty.  NAPO thanks Rep. Connolly for his commitment to seeing this important bill across the finish line in the House.

The House passed the Active Shooter Alert Act, H.R. 6538, by a vote of 260-169 on July 13. NAPO worked closely on this bill with its sponsors, Representatives David Cicilline (D-RI) and Fred Upton (R-MI), to ensure it met the needs of law enforcement responding to active shooter situations.  This bill would create a program similar to the AMBER Alert system for law enforcement to alert the public to active shooters in their community. The Active Shooter Alert would be a voluntary program for states and law enforcement agencies to implement and it would be spearheaded by Department of Justice, which would coordinate training, technical support, and best practices for states who want to enact an Active Shooter Alert plan.

NAPO believes this will assist law enforcement in alerting citizens of an active shooter situation in their vicinity, keeping them away from the incident and maintaining their safety.  We thank Representatives Cicilline and Upton for their support and efforts to pass this commonsense bill through the House.

NAPO Executive Director Bill Johnson was interviewed for a July 13, 2022, article in The Washington Times entitled, “Soft-on-crime policies blamed as Starbucks, convenience stores shutter in Democrat-run cities”. The article highlights Starbucks decision to close 16 locations in the District of Columbia, Seattle, Los Angeles, Philadelphia and Portland, Oregon, due to the high rates of retail crime in those cities and goes on to discuss how these cities are struggling with quality-of-life crimes. Starbucks is not alone in closing stores due to stealing, vandalism, and unsafe environments.  Companies such as Walgreens, CVS, and Wawa, as well as small businesses, are also shuttering their doors in high crime areas.

Johnson stated that he wasn’t surprised by the store closures, given that police departments in these major cities are struggling with low officer morale and hiring and retention issues that have resulted in understaffing.

“Many cities have taken steps to restrict the traditional proactive activities of police, and I think a lot of progressive prosecutors are doing it as well,” Mr. Johnson said.

“They’re making it difficult to prosecute quality of life crimes, and those are the types of crimes that frequently hit small business, like shoplifting, graffiti, trespassing,” he said.

He added that “a small business, if they have the option, they’re going to go to a place with less crime as opposed to an area with high crime or poor police response. That’s just human nature.”

NAPO will continue to ensure our members’ voices are heard loud and clear on the Hill, with the Administration, and in the media.

Coalition Against Bigger Trucks
Protecting Our Public and Our Police Officers

Lending to Heroes
Most Trusted Lender to Law Enforcement 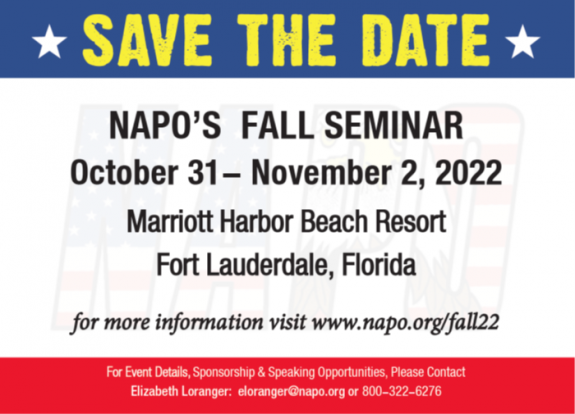