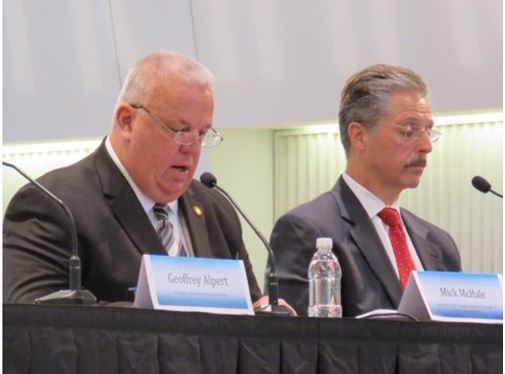 On December 18, 2014, President Obama signed an Executive Order to create the Task Force on 21st Century Policing, and announced its members, which includes NAPO.  NAPO is the only police rank and file group in the nation to have a seat on the Commission itself.   Our Treasurer, Sean Smoot, of the Illinois PB&PA, was appointed by the President to the Commission.

On January 30, 2015, NAPO’s President, Mick McHale, testified at the Task Force’s second listening session, which focused on “Policy & Oversight.”  Mr. McHale was included in a panel to explain law enforcement’s perspective on “use of force” policies.

In his testimony, Mr. McHale explained that force is not something officers want to be put in a position to use. He also stressed that criticism of police by political leadership has made law enforcement officers’ jobs more dangerous.  Mr. McHale’s recommendations to the panel included: educating the public about police and their duties; having political leadership publicly support grand jurors and other public officials when they make correct, but unpopular decisions; and encouraging citizens to take part in civilian-police interactions, such as patrol car ride-alongs.

Notably, during the hearings, Attorney Lynch discussed the need to strengthen relationships between law enforcement and the communities they serve.

NAPO continues to evaluate Attorney Lynch’s nomination, and we are closely following the confirmation process.  We will continue to keep our members updated.

On January 28, 2015, Senator Kelly Ayotte (R-NH) and Congressman Erik Paulsen (R-MN) reintroduced the “Don’t Tax Our Fallen Public Safety Heroes Act.”  This legislation clarifies that both federal and state death benefits for the survivors of law enforcement officers killed in the line of duty should be treated the same and not be subjected to federal income tax. Survivor benefits for federal law enforcement officers are currently not subject to federal income tax, but there is some ambiguity about the treatment of these benefits for similar state-based programs.

NAPO continues to work closely with senior staffers for Senator Ayotte and Congressman Paulsen to garner support for this legislation.   Congressman Paulsen recognized NAPO’s efforts in his press release on the legislation, which is available at the following site:  http://paulsen.house.gov/press-releases/paulsen-authors-bill-supporting-families-of-fallen-police-officers-and-firefighters/.

NAPO will continue to expend all available efforts to pass this important legislation.  If you have any questions about this legislation, please contact Melissa Nee at:  mnee@napo.org.

The Mentally Ill Offender Treatment and Crime Reduction Act (MIOTCRA) created the Justice and Mental Health Collaboration Program (JMHCP) to help states and counties design and implement collaborative efforts between criminal justice and mental health systems.  The JMHCA reauthorizes the successful MIOTCRA and extends the JMHCP for five years.  The JMHCP can help law enforcement agencies across the United States in their responsibilities in assisting citizens with mental health issues.

NAPO expended much effort to garner support for the JMHCA during the last Congress, and was successful in building a strong bipartisan list of cosponsors in both chambers.  NAPO also assisted in efforts to pass the bill out of the Senate Judiciary Committee.

NAPO looks forward to continuing to work with fellow stakeholders during this Congress to reintroduce and pass this important legislation.

The Zadroga bill’s two critical programs providing medical treatment and compensation for 9/11 heroes – the World Trade Center Health Program and the September 11th Victim Compensation Fund – are set to expire in October 2015 and October 2016 respectively. This legislation, (introduced during the 113th Congress), would continue these programs for 25 more years, through 2041.

NAPO looks forward to working with key law enforcement stakeholders to pass this important legislation during the 114th Congress.  If you have any questions about this legislation, please contact Bill Johnson at:  bjohnson@napo.org.

In January, Senator Patrick Leahy (D-VT) and Congressman Frank LoBiondo (R-NJ) reintroduced legislation to reauthorize the lifesaving Bulletproof Vest Partnership (BVP) Grant Program, a federal grant program that helps state and local law enforcement agencies purchase bulletproof vests for officers working in the field.  The BVP Grant Program has issued more than one million lifesaving vests to 13,000 state and local law enforcement agencies throughout the country since it was established in 1999.  NAPO continues to expend all available efforts to garner support for this important legislation.

The staffer was very receptive, and we look forward to working with Senator Boxer and her staff during this Congress.

If you have any questions about this meeting, please contact Melissa Nee at: mnee@napo.org.

On January 30, 2015, NAPO joined other stakeholders in a discussion on strategies to move Senator John Cornyn’s (R-TX) Justice for Victims of Trafficking Act forward.  This legislation would boost support for and protection of victims of human trafficking by increasing law enforcement resources, enhancing victims’ services, and increasing penalties in an effort to combat child sex trafficking, child pornography, sexual exploitation, and human trafficking.

We are committed to working with Senator Cornyn and his staff to ensure this legislation is passed.  Senator Cornyn has highlighted NAPO’s efforts to pass the bill in his press releases, including the following release:  http://www.cornyn.senate.gov/public/index.cfm?p=NewsReleases&ContentRecord_id=8358cac8-2ad6-4ce7-89b5-6c412731f3fa.

Additionally, a version of Senator Cornyn’s Justice for Victims of Trafficking Act, sponsored by Congressman Ted Poe (R-TX), passed the House of Representatives by voice vote last week.  This legislation is a scaled down version of Senator Cornyn’s bill.  NAPO is working to ensure the more robust version becomes law, but does not object to any of the tenets outlined in Congressman Poe’s bill.

As noted in last week’s Washington Report, Congressman Matt Salmon (R-AZ) has reintroduced the Electronic Communications Privacy Act (ECPA) Amendments Act of 2015.  This legislation is intended to bring outdated Federal electronic privacy laws into the digital age. The bill makes changes ECPA to establish a search warrant requirement for the government to obtain Americans’ e-mails and other electronic communications from third-party service providers.

Today, NAPO sent a letter of opposition to this bill.  NAPO is very concerned that the legislation adds unnecessary warrant requirements.  Warrants take much longer to secure as compared with the current practice of officers obtaining a court order.  This is of particular concern in time critical cases, such as active kidnapping or child abduction cases.  Moreover, warrants require an affidavit, which generally becomes public.  These documents have the potential to expose law enforcement and informant identities and methods.

On January 28, 2015, NAPO attended a Department of Homeland Security (DHS) roundtable discussion on efforts to end human trafficking.  The Commissioner of U.S. Customs and Border Protection, Gil Kerlikowske, opened the meeting, which included the following members of DHS:

Mr. Santoro provided information on the DHS Blue Campaign, which is a project DHS has developed to raise public awareness and increase law enforcement training to combat trafficking.  The Blue Campaign website, (http://www.dhs.gov/blue-campaign), includes training for law enforcement officers to help identify victims of trafficking during the course of their duties.

Roundtable participants were provided an opportunity to discuss efforts to combat human trafficking, including lessons learned, challenges, and potential areas for more collaboration.  NAPO used this opportunity to highlight our work on the Hill to pass the Justice for Victims of Trafficking Act.

NAPO will continue to provide updates on our efforts to combat human trafficking.  If you have any questions about this discussion, please contact Melissa Nee at:  mnee@napo.org.

NAPO’s “Legislative Positions” document is available at the following site:  https://www.napo.org/files/6114/2290/0684/Legislative_Positions_-_114th_Congress.pdf.  The table includes legislation, introduced during the 114th Congress, which impacts our members.  NAPO will update this table regularly, and continue to ensure our voice is heard on Capitol Hill.

If you have any questions about any of the legislation that NAPO is currently working, please contact Melissa Nee at:  mnee@napo.org.