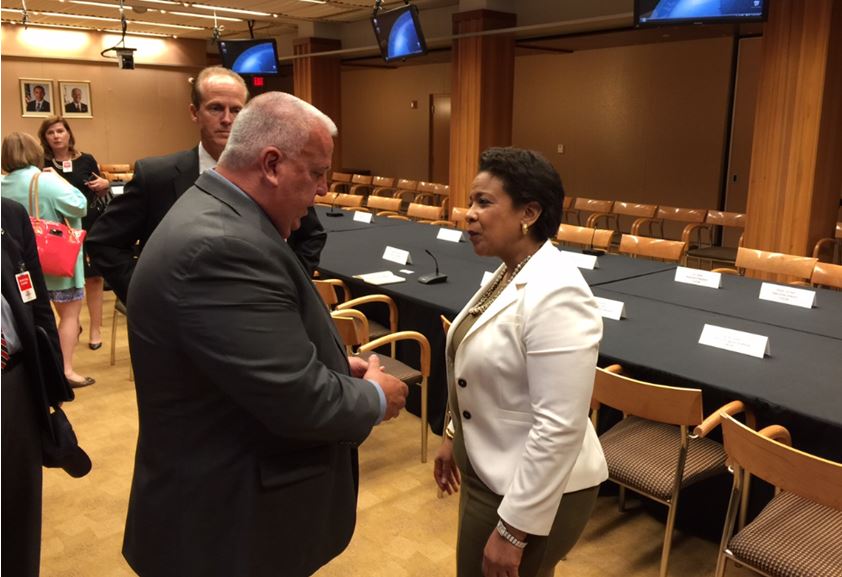 If you have any questions about NAPO’s interactions with the Administration, please contact Bill Johnson at:  bjohnson@napo.org.

On June 25, 2015, Members of Congress were provided an opportunity to present ideas to the House Judiciary Committee on how to reform the criminal justice system.  More than a dozen Members of Congress showed up to the Committee listening session to pitch their reform proposals in the wake of the Committee's announcement that it plans to overhaul the nation's criminal justice system.

The House Judiciary Committee, which has primary jurisdiction over the U.S. Criminal Code, will be taking incremental steps toward revamping that system throughout the next several months, and last week’s listening session was a first step in that process.

NAPO’s Executive Director, Bill Johnson, responded to these recommendations in a recent Washington Times article:  “The ‘pie in the sky’ feel-good ideas that legislators favor and academics tend to propose often do not translate well into real-world actions…Additionally, Congress needs to exercise great caution before making any  decisions that might restrict the ability of police to defend themselves.”

Johnson furthered:  “I think it's important to have rank-and-file's input from the very start…And I think that the recommendations that they may come up with or the changes that they may want to make won't get any traction in the real world unless the police perspective is taken into account."

The full article is available at the following site:  http://www.washingtontimes.com/news/2015/jun/25/congress-examines-plans-to-reform-justice-system/print/.

Last week, Johnson was quoted in a Daily Progress article on a University of Virginia law professor’s claim that it would be “unusual” for a court to appoint a special prosecutor to handle a specific officer’s criminal cases just because a prosecutor refuses to proceed with any of his cases.  The article details the town of Culpeper’s (Virginia) civil lawsuit filed June 17, 2015 against Culpeper’s Commonwealth Attorney Megan Frederick, who refuses to prosecute any of town officer Matthew Haymaker’s cases.

Johnson explained:  “It's important to point out that…it is mere speculation to guess what upset the prosecutor about detective Haymaker. ‘Given that not only the local police department, but the town council as well, support the detective, it seems it can't be any sort of gravely serious matter. It seems more likely to me that the prosecutor may be offended by something much more minor, such as methods of interrogating a suspect that are perfectly legal, but that seem rude, or even something as commonplace as coarse language or an inappropriate joke.’”

Johnson furthered:  "Regardless of the underlying actions that have led the prosecutor to take her position, NAPO thinks that her office should be at least equally concerned about dragging a detective's reputation through the mud and threatening his livelihood, as it appears to be with a persnickety interpretation of the Brady rule."

The full article is available at the following site:  http://www.dailyprogress.com/starexponent/uva-professor-calls-culpeper-town-s-claim-for-special-prosecutor/article_d40fc4f0-1a06-11e5-962c-6b54ecd10b1b.html?mode=print.

NAPO will continue to ensure our members’ voices are heard loud and clear on the Hill, with the Administration, and in the media.  If you have any questions about the publications cited above, please contact Bill Johnson at:  bjohnson@napo.org.

Last week, NAPO spoke with a senior staffer for Congressman Ted Deutch (D-FL) about ourproposed modifications to the Driver’s Privacy Protection Act (DPPA).  (NAPO has discussed this issue with the Congressman’s staff several times over the past two months).

The DPPA requires state motor vehicle departments to receive permission from individuals before their personal motor vehicle record may be sold or released. The DPPA amendment authorizes a private right of action for knowing violations, and a court may award automatic “damages” in the amount of $2,500 for each time a record was accessed, even if no actual damages were proved, as well as attorney fees and other litigation costs. Law enforcement officers are subject to these stringent punishments, even if they did not review files with criminal intent.

NAPO’s proposed language modifications include adding a clause that explains that penalties will be applied only if persons access information with the specific intent to secure an economic benefit. Also, NAPO proposes removing the automatic imposition of the $2,500 penalty for violations of this act, as well as adding a statement that explains there must be repeated disregard of this law for sanctions to take effect.

If the language is not modified, law enforcement officers will be subject to large fines, and even the loss of their licenses for de minimus actions.

Congressman Deutch’s staff continues to be very receptive to our proposals.

NAPO will continue to aggressively lobby members of Congress to gain support for our proposed language changes to the DPPA.  We will keep our members updated on the status of these initiatives.  If you have any questions about our efforts, please contact Bill Johnson (bjohnson@napo.org) or Melissa Nee (mnee@napo.org).

Last week, NAPO pledged our support for Social Security Fairness Act, introduced by Senator Sherrod Brown’s (D-OH) and Senator Susan Collins (R-ME).  This bill would eliminate the Windfall Elimination Provision (WEP) and Government Pension Offset (GPO) formulas, which both reduce benefits for public sector workers and their families and penalize workers who split their careers between the private and public sectors.

These provisions take hard-earned Social Security dollars out of the hands of retirees or their spouses – money that would otherwise be spent on essential goods and services and bolster the local economy. By significantly scaling back and reducing Social Security benefits for law enforcement officers and their survivors, as GPO and WEP do, officers and their families are provided much less protection against financial difficulties.

NAPO will continue to work closely with fellow stakeholders to garner support for this critical piece of legislation.  (NAPO pledged our support for the House companion bill, sponsored by Congressman Rodney Davis (R-IL), shortly after it was introduced in February 2015).

NAPO will keep our members updated on the status of this legislation.  If you have any questions about the Social Security Fairness Act, please contact Melissa Nee at:  mnee@napo.org.

Last week, the White House expressed “serious concerns” about the Senate Appropriations Committee's $51.1 billion Commerce-Justice-Science (CJS) spending bill, which is $960 million more than the 2015 enacted level and what the Committee says is $985 million below the president’s budget request.

The Office of Management and Budget (OMB), in a letter to Appropriations Chairman Thad Cochran (R-MS), wrote that the bill is more than $3 billion less than the president’s request. (The Committee advanced the bill on June 11, 2015 on a 27-3 vote).

The OMB letter was similar to others sent to Congress on fiscal 2016 appropriations bills, such as Energy-Water and Military Construction-VA. The Administration stopped short of a preliminary veto threat, but detailed concerns about the bill.

Notable to our members, the White House expressed concerns that the bill underfunds critical law enforcement components of the Department of Justice. The letter states:

“Trust between law enforcement agencies and the people they protect and serve is essential, but the Committee bill would leave the components unable to support key State and local initiatives that promote innovative criminal justice reforms, improve relations between communities and police, and implement important initiatives aimed at making our communities and citizens safer.”

NAPO continues to stay engaged on CJS spending bills, and we will continue to work with other stakeholders to ensure that state and local law enforcement officers receive necessary funding to keep our communities safe.

If you have any questions about the House or Senate CJS bills, please contact Melissa Nee at:  mnee@napo.org.