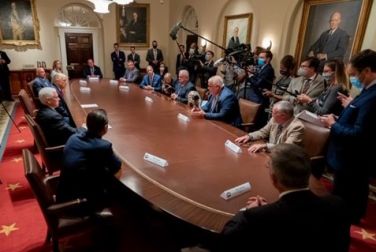 On July 15, NAPO endorsed President Donald Trump’s re-election campaign for President of the United States. Our endorsement recognizes his steadfast and very public support for our men and women on the front lines, especially during this time of unfair and inaccurate opprobrium being directed at our members by so many. We particularly value the President directing the Attorney General to aggressively prosecute those who attack our officers; his signing into law the Law Enforcement Mental Health and Wellness Act; his advocacy and signing into law the legislation which permanently authorized funds to support 9/11 first responders and their families; his revitalization of the Project Safe Neighborhoods program to help reduce violent crime; and his unflagging recognition that America’s law enforcement officers, just like any other citizens, have Constitutional rights, too.

NAPO’s President, Mick McHale, elected officers, and leadership met with President Trump and Vice President Pence at the White House on July 31, to discuss the difficulties law enforcement officers are currently facing on the streets of our nation’s cities and towns. Today, officers are working in an untenable environment. They are essential workers in the coronavirus pandemic, putting their health at risk to serve and protect their communities. They are working double shifts and overtime on the front lines as cities and

towns across the nation experience daily protests and all too frequent riots. Further, officers in our nation’s largest cities are experiencing significant increases in violent crimes – particularly gun-related crimes – that are straining the resources of departments.  They are doing all this in the face of hatred for the uniform they wear, for the laws they are bound by duty to enforce.

A transcript of the meeting can be read here.

Negotiations on Next Coronavirus Aid Package Hit a Wall

Week two of negotiations around the next coronavirus aid package is ending and the White House and Democratic Congressional leadership are far from a final agreement and hopes of an agreement any time soon are dwindling. Meanwhile, the House as adjourned for a five-week summer recess, while the Senate will remain in session next week. The House will be called back into session to vote once, and if, a deal is made.

President Trump tweeted that if a deal is not close by the end of today, he will look to take unilateral action via Executive Orders regarding eviction protections, unemployment extensions and student loan repayment options.

The Democrats passed the Health and Economic Recovery Omnibus Emergency Solutions (HEROES) Act, H.R. 6800, which provided extensive aid in response to the COVID-19 pandemic, over two months ago. House Speaker Nancy Pelosi and Senate Minority Leader Charles Schumer are pushing for much of what was included in the HEROES Act to be in the final deal, including funding for state and local government and a repeal of the cap on the state and local tax (SALT) deduction, both of which are NAPO priorities.

According to reports, in the course of negotiations, the Administration has moved from opposing providing any new funding to state and local governments to being willing to provide some, but Democrats say their offer falls far short of what is needed. Republicans have also offered to create flexibility for the use of existing aid, allowing it to be used to make up for revenue shortfalls and extending the date for using that aid.  This has become one of the major sticking points in the negotiations, with Speaker Pelosi and Minority Leader Schumer sticking to the nearly $1 trillion in state and local aid that passed the House as part of the HEROES Act.  Republicans, in their opposition to such a high amount, point to a Treasury Department Office of Inspector General report that found that, on average, states have not used three-quarters of the currently available funding from the CARES Act.

There is not enough support in the Senate amongst Republicans for another COVID-19 relief package, so any agreement must have significant Democrat support to pass.

NAPO continues to press Congressional leaders to support additional, flexible economic assistance to state and local governments in this next aid package and sent a letter to House and Senate Leadership on July 29 urging its inclusion. We are also pushing for funding to help law enforcement agencies pay for COVID-19 related overtime, hazard pay and additional sick leave. Direct aid to state and local governments would go a long way to covering these costs and preventing pending furloughs and layoffs of officers and agency employees.

We will keep our members updated on the latest as these negotiations continue.

NAPO pledged its support for the Qualified Immunity Act of 2020, introduced by Representative Jim Banks (R-IN). Qualified immunity is an important protection for the men and women in law enforcement who put their lives on the line every day to protect our communities. This legislation recognizes that Courts have repeatedly noted that the doctrine does not shield the inept or willfully blind, but does protect law enforcement officers from attempts to impose “after-the-fact” liability for actions that no reasonable official could have known were unlawful at the time. By codifying the currently accepted doctrine of qualified immunity, the Qualified Immunity Act will ensure that violations of known rights are punished, and those officers who performed their duties reasonably are shielded from harassment.

We thank Representative Banks for his efforts to safeguard officers’ qualified immunity protections and we look forward to working with him to pass the Qualified Immunity Act into law.

On July 30, Representative Ken Buck (R-CO) introduced House Resolution (H.Res) 1071 in support of America’s law enforcement officers. NAPO worked with Rep. Buck’s staff on the resolution and supports his efforts to stand up and acknowledge the dedicated and ethical services of the men and women in law enforcement.

There has never been a more challenging time in our nation’s history for law enforcement officers.  The crimes and physical dangers, assaults, and risks have always been with us.  The National Law Enforcement Officers Memorial includes the names of officers killed in the line of duty as far back as 1786.  The psychological toll on officers and their families as a result of confronting human misery and evil day after day has also been an associated risk for those in law enforcement.  But today, many elected officials, including prosecutors and judges, academicians and media personalities, vocally and doggedly identify and highlight the police as though law enforcement is the sole source of racial and social injustice.

This resolution fights that narrative and recognizes the men and women who serve their communities as police officers as a valued and integral part of protecting and enhancing the health, safety and welfare of our towns, cities and states. NAPO thanks Rep. Buck for his continued support for our members and the law enforcement community.

Congress to Adjourn for August Recess without Passing Any Appropriations Bills

The House adjourned for August recess on July 31 and the Senate will officially adjourn for recess on August 13. Before adjourning, the House passed 10 of the 12 Fiscal 2021 appropriations bills, mainly along party-line votes, including the Commerce, Justice, Science and Related Agencies (CJS) spending bill. The Senate has yet to act on any Fiscal 2021 appropriations bills, even at the subcommittee level, due to policy and procedural disagreements.

The House passed CJS bill would provide funding to implement much of the House-passed police reform bill, the George Floyd Justice in Policing Act, which NAPO opposed.  It would also maintain similar funding levels for most of NAPO’s priority grant programs, including the Byrne Justice Assistance Grant, the COPS Hiring Program, and the Bulletproof Vest Partnership Grant Program, and it would increase funding for the Law Enforcement Mental Health and Wellness Act Program.  However, given the significant funding given to enact provisions of the Justice in Policing Act, NAPO cannot support the House-passed CJS bill.

On July 30, the White House issued a statement on administration policy that the President will veto the bill due to the inclusion of the police reform policies that the Administration does not support, amongst other reasons.  The Senate is not expected to take up the CJS spending bill or any spending measure before recess. Given that it is an election year and the end of the fiscal year is quickly approaching, it is anticipated that Congress will pass a continuing resolution to fund the government at current levels when they return from recess after Labor Day that will last at least through after the November elections.

NAPO’s updated “Sponsor/Cosponsor” spreadsheet is available at the following link: https://www.napo.org/washington-report/sponsor-cosponsor-spreadsheet/. The spreadsheet accompanies the latest “Legislative Positions” document, which is available at the following link: https://www.napo.org/washington-report/legislative-priorities/. NAPO's Legislative Positions is a document that highlights all the legislation that we have taken an official position on or are monitoring during the 116th Congress. It is continually updated to reflect the work we are doing on Capitol Hill.