On October 20, 2014, NAPO sent the attached letter of opposition to the Death in Custody Reporting Act (S. 2807) to every member of the Senate Judiciary Committee.  This bill requires states that receive allocations under specified provisions of the Omnibus Crime Control and Safe Streets Act of 1968 to report to the Attorney General certain information regarding the death of any person who is detained, arrested, en route to incarceration, or incarcerated in state or local facilities or a boot camp prison. The bill imposes penalties on states that fail to comply with such reporting requirements.

NAPO is concerned about this legislation, which is expected to be reviewed by the Senate Judiciary Committee when Senators return from recess.  NAPO strongly feels that this bill will negatively impact the availability of important resources for law enforcement to use to keep our communities safe.  Specifically, NAPO is concerned that the Death in Custody Reporting Act pursues its goals through penalties to the Edward Byrne Memorial Justice Assistance Grant (Byrne JAG) Program - a critical resource for law enforcement.

Law enforcement departments across the nation continue to keep our communities safe with scarce resources.  This legislation has the potential to jeopardize public safety through Byrne JAG penalties.  The Byrne JAG Program provides resources for multi-jurisdictional drug and gang task forces, information sharing and technology, county jails, prosecutors, drug courts, and juvenile delinquency and drug treatment courts.  Losing access to a percentage of this funding will undermine law enforcement’s mission to keep the public safe.

We understand the desire for timely and accurate data.  However, this effort should not be pursued at the expense of the law enforcement community, which is already operating on limited resources.

Over the past week, NAPO has contacted key staffers on the Senate Judiciary Committee to voice our concerns about this bill.  We will keep our members updated on the status of this legislation.  If you have any questions about this bill, please contact Melissa Nee at:  mnee@napo.org.

Over the past week, NAPO participated in the following teleconferences to move the project forward:

NAPO looks forward to continuing to work with DOJ leadership and fellow law enforcement stakeholders on this important project.  We will keep our members updated on the status of this initiative.  If you have any questions about NAPO’s efforts on the criminal justice review project, please contact Bill Johnson at:  bjohnson@napo.org.

On October 24, 2014, NAPO met with senior staffers for the following members of the House Judiciary Committee:  Congressman Louie Gohmert (R-TX), Congressman Cedric Richmond (D-LA), and Congressman Hakeem Jeffries (D-NY).  NAPO continues to pursue our top legislative priorities through the end of this Congress, and ensure that these priorities remain at the top of the Congressional agenda when the 114th Congress begins.  NAPO used the aforementioned meetings to outline our highest priorities, which include the following initiatives:

NAPO appreciated the opportunity to meet with each of the staffers, and looks forward to working with them in the future.  If you have any questions about any of the issues summarized above, please contact Melissa Nee at:  mnee@napo.org.

On October 23, 2014, NAPO participated in a stakeholder conference call with Dr. Thomas Frieden, Director of the U.S. Centers for Disease Control and Prevention (CDC), to discuss the U.S. response to Ebola.  The discussion, hosted by the White House Office of Public Engagement, focused on the Administration’s efforts to respond to the spread of the Ebola virus.  The CDC referred to a full list of initiatives to halt the spread of the virus, including entry/exit screenings and continued monitoring of individuals traveling from impacted countries.  Additional information is available at the following site:  http://www.cdc.gov/vhf/ebola/outbreaks/2014-west-africa/qa.html.

On October 17, 2014, NAPO sent letters of recommendation to the Chairmen and Ranking Members of the Congressional committees with jurisdiction on issues related to the Ebola virus.  NAPO recommended ways to inhibit the spread of the virus in the United States through travel restrictions and the implementation of new protocols for those responsible for addressing Ebola threats at airports.

NAPO is very concerned for the safety of our first responders and the public that they protect.  We feel strongly that steps can be taken to prevent the spread of this disease.  To ensure the safety of our nation, we proposed the following actions to Congressional committee leadership:  ban flights from affected nations; require that medical personnel traveling to and from the affected countries, as well as infected Americans traveling to the country for treatment, be transported by specially reserved and monitored designated aircraft; and institute a uniform national protocol among agencies (airport police; Customs and Border Protection; and EMS) responsible for addressing the Ebola threat at airports and other ports of entry. 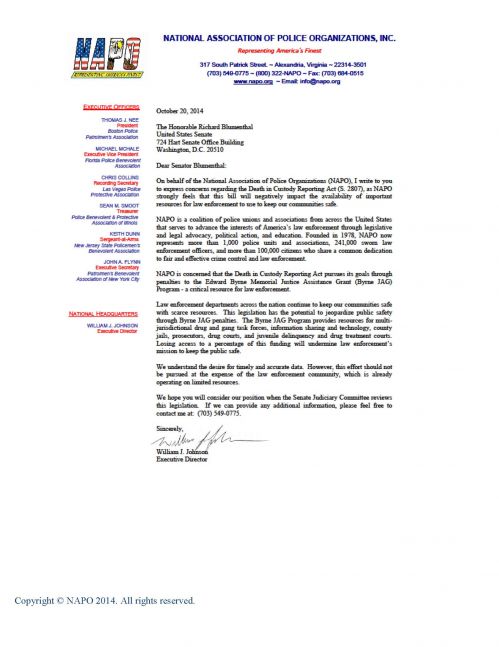