CNN has extended its ongoing streak of anti-police rhetoric and misinformation by calling the violent attacker at the Dallas Police Department “courageous and brave.”  This is from the same network that promulgated the whole “hands up, don’t shoot” myth after the Ferguson, Missouri shooting.

Below please find the text of a letter from NAPO Executive Board member and PANO President Mike Glasser instituting a call for a boycott of CNN and its advertisers.

To whom it may concern,

Being a citizen with an avid interest in news, current events, and social trends, like many folks I rely on mainstream media for accurate and contemporary reporting. It is no secret that some media sources will interview pundits and collaborators with views more aligned with the station’s own views thus casting the light of events in the desired shade. This is generally recognized and an accepted practice. Experience will teach the viewer what to expect and one can generally compensate by watching a variety of news sources to acquire a balanced perspective.

As the president of the police labor organization representing New Orleans police officers, I am frequently interviewed locally and occasionally nationally. I have often seen my own interviews edited and presented entirely differently depending upon the station doing the reporting. I mention this to give perspective to my comments which follow. I have had a lot of experience with how various news outlets distort news and commentary depending on their agendas.

I saw the piece with CNN anchor Fredricka Whitfield regarding the attack on the Dallas (TX) Police headquarters early Saturday morning. I was appalled when I heard Whitfield describe the attacker, armed with automatic weapons and incendiary devices and using an armored vehicle as, “courageous” and “brave.”

On July 12, 2012, when CNN reported on the mass shooting at the Century movie theatre in Aurora, CO, the shooter was never described as courageous and brave. Nor was the shooter at Ft. Hood, TX in July, 2009, nor the next gunman at Ft. Hood in 2014.

It appears that when the attack is on a police station, CNN decides to glorify the attacker. Now perhaps it is only Ms. Whitfield’s opinion and not that of CNN. The people at CNN should understand that Ms. Whitfield’s remarks have incensed and insulted the entire law enforcement community along with each and every officer, deputy, and agent who has sworn to protect the public and risks their lives daily.

I’m certain that if CNN’s studios were attacked in a similar way and a police spokesperson described that attacker as brave, that sound bite would be replayed for days on end with a demand for the termination of that spokesperson and an apology from that Department.

At a time when politics is rendering American law enforcement impotent and it seems like we are being vilified by everyone with access to a microphone or a WiFi connection, CNN chooses to offer a cheap and offensive remark on international television. Unless there is a significant public apology by CNN and Ms. Whitfield to the Dallas Police Department and the entire law enforcement community, I will encourage my counterparts nationwide to endorse a boycott of CNN and all its supporting advertisers by all police officers, sheriff’s deputies, state and federal agents, all unsworn law enforcement personnel and their families, friends, and supporters.

Additionally, the Dallas Police Association has issued a press release on this issue, which is attached below.

If all of our member groups can help get this word out and ask their officers, family members, and friends to write even one letter or email to a CNN advertiser, it will make a difference!

NAPO has been working over the weekend with staff members of Congress to put pressure on the President to rescind his order banning or restricting defensive equipment for police.  This weekend’s attack in Dallas demonstrates the very real need for armor and high-caliber weapons for police to defend themselves and the public they protect.

NAPO is working on a letter to the headquarters of CNN’s major sponsors.  Please let us know of any actions you take on this issue by copying us on letters and emails.

If you have any questions about our efforts, please contact Bill Johnson at:  bjohnson@napo.org. 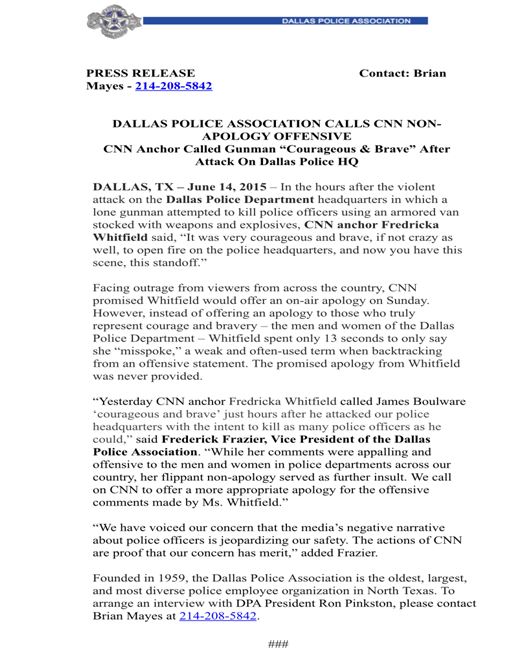