NAPO continues to advocate for our top priority grant programs to be fully funded.  We have sent letters to Chairman Shelby and Ranking Member Mikulski, urging them to fund the Bulletproof Vest Partnership (BVP) Grant Program at its fully authorized amount of $50,000,000.  (NAPO’s letter requesting full funding of the BVP Grant Program is available at the following link:  https://www.napo.org/files/1614/2713/5416/NAPO_Letter_of_Support_-_BVP_Program_FINAL_PDF.pdf).

The BVP Grant Program is a critical resource for state and local jurisdictions.  This program has issued more than one million lifesaving vests to 13,000 state and local law enforcement agencies throughout the country since it was established in 1999.  However, while many officers are protected by bullet-resistant armor, an alarming number of officers, many in small departments across the United States, are not afforded this same protection due to local budget constraints.  Funding the BVP Grant Program at its full level of $50,000,000 will ensure that officers are provided with necessary protection as they work tirelessly to protect our communities.

NAPO also joined other stakeholders on a letter to House and Senate Appropriators, urging full funding for the Byrne Justice Assistance Grant (Byrne JAG) Program.  Byrne JAG is the cornerstone federal crime-fighting program, supporting the federal government’s crucial role in spurring innovation, as well as testing and replicating evidence-based practices nationwide.  State and localities use Byrne JAG to test emerging and evidence-based approaches to the public safety challenges in their jurisdictions. Because Byrne JAG is flexible, state and local communities are able to use funding to address needs and fill gaps across the entire juvenile and criminal justice systems.

NAPO will continue to aggressively pursue full funding of our top priority grant programs.  If you have any questions about our efforts, please contact Melissa Nee at:  mnee@napo.org. 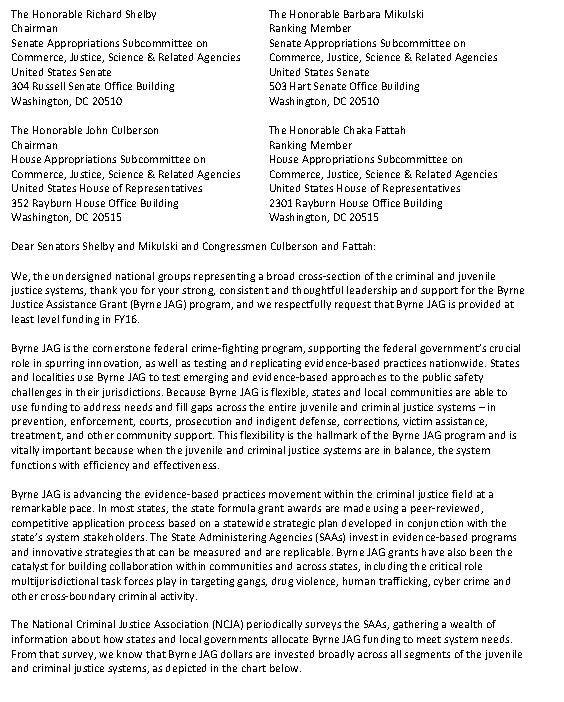 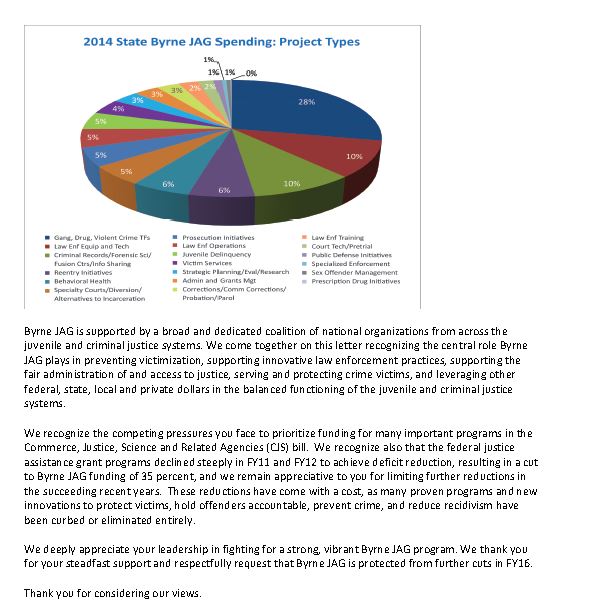 On April 2, 2015, NAPO met with a senior staffer for Congressman Steve Stivers (R-OH).  During the meeting, NAPO highlighted our support of the Responsible Additions and Increases to Sustain Employee (RAISE) Health Benefits Act of 2015 (H.R. 1185), sponsored by Congressman Stivers.  This bill responds to individuals who have been negatively impacted by guidelines set forth in the Affordable Care Act regarding Flexible Spending Arrangements (FSAs). (NAPO’s letter of support is available at the following link: https://www.napo.org/files/5614/2660/8036/NAPO_Supports_the_RAISE_Act_FINAL.pdf).

Law enforcement officers across the United States rely on FSAs to pay for healthcare services and items that are not covered by insurance.  Officers have been negatively impacted by guidelines set forth in the Affordable Care Act, which decreased the amount an officer could contribute to an FSA from $5,000 per year to $2,500 per year.  Even more, these accounts’ end-of-year balances do not roll over from year to year, and the remaining funds are forfeited.

The RAISE Act solves these issues by canceling the “use-it-or-lose-it” rule for all FSAs, allowing families to build balances over several years.  The bill also doubles the current FSA annual contribution cap to $5,000 per year and allows families with more than two dependents to save an additional $500 a year for each additional dependent.

NAPO also provided information on our other priorities, including the following pieces of legislation:

Rafael Ramos and Wenjian Liu National Blue Alert Act:  This legislation will help to create a nationwide alert system to quickly identify and apprehend suspects when a law enforcement officer is killed or seriously injured, missing in connection with official duties, or if there is an imminent/credible threat related to an attack on law enforcement. This legislation was named after New York City Police Department Detectives and NAPO members Ramos and Liu, who were assassinated while serving their community. The killer posted threats to law enforcement on social media before the attack. Implementing a nationwide Blue Alert system will help to ensure that information on credible threats, like those posted by the individual who killed Detectives Ramos and Liu, is widely disseminated so that officers have advanced warning, and can apprehend the criminal before he or she can do more harm.

Bulletproof Vest Partnership Grant Act:  This legislation extends the authorization of the Bulletproof Vest Partnership (BVP) Grant Program through fiscal year 2020, and ensures that America’s law enforcement officers are provided with the life-saving protection they need. The BVP Grant Program is a critical resource for state and local jurisdictions. Over the past decade, this vital program has enabled the protection of over one million officers. However, while many officers are protected by bullet-resistant armor, an alarming number of officers, many in small departments across the United States, are not afforded this same protection due to local budget constraints. Reauthorizing this program will ensure that our officers are protected.

Ax the Tax on Americans' Health Plans Act:  Beginning in 2018, the Patient Protection and Affordable Care Act imposes a new 40% annual excise tax on taxpayers who are covered by high-cost, or “Cadillac” health insurance plans. This bill will repeal the “Cadillac Tax,” and ensure public safety officers and their families are not unduly burdened.

Don't Tax Our Fallen Public Safety Heroes Act:  This legislation clarifies that both federal and state death benefits for the survivors of law enforcement officers killed in the line of duty should be treated the same and not be subjected to federal income tax.

The staffer was very receptive to the proposals summarized above.  If you have any questions about this meeting, please contact Melissa Nee at:  mnee@napo.org.

On April 1, 2015, the Slain Officer Family Support Act of 2015 was signed by President Obama and became law (Public Law, PL 114-7, 129 Stat. 83).  NAPO worked closely with the bill’s sponsors, Congressmen Hakeem Jeffries (D-NY) and Peter King (R-NY), to pass this important legislation, which extends the tax deadline so that individuals making charitable donations for the families of assassinated New York Police Department Detectives Wenjian Liu and Rafael Ramos can apply such tax deductions to their 2014 tax return.

Congressman Jeffries included a quote from NAPO’s Executive Director, Bill Johnson, in his press release on the bill:

“NAPO is grateful to Congressmen Jeffries and King for introducing the Slain Officer Family Support Act of 2015.  This important legislation will ensure continued support to the families of two heroes who dedicated their lives to public service, NYPD Detectives Rafael Ramos and Wenjian Liu.  As we continue to mourn the loss of these officers, who were members of NAPO, it is critical that we provide their families with every available resource.”

NAPO will continue to work to ensure the families of Detectives Ramos and Liu receive the support they need.

If you have any questions about the Slain Officer Family Support Act, please contact Melissa Nee at:  mnee@napo.org.

On April 2, 2015, Secretary of Homeland Security Jeh Johnson announced the release of Fiscal Year (FY) 2015 Notices of Funding Opportunity for nine DHS preparedness grant programs totaling more than $1.6 billion. The grant programs provide funding to state, local, tribal, and territorial governments, as well as transportation authorities, nonprofit organizations, and the private sector, to improve the nation’s readiness in preventing, protecting against, responding to, recovering from, and mitigating terrorist attacks, major disasters, and other emergencies.

The FY 2015 grant guidance will continue to focus on the nation’s highest risk areas, including urban areas that face the most significant threats. For FY 2015, the Urban Area Security Initiative (UASI) will enhance regional preparedness and capabilities by funding 28 high-threat, high-density urban areas.

Based on consistent feedback from state, local, tribal, and territorial partners regarding the challenges created by a two-year period of performance, the Secretary addressed this concern in the FY 2015 grant guidance by increasing the period of performance for grant awards from two years to three years for all FY 2015 grant programs, except the Assistance to Fire Fighters Grants and the Emergency Management Performance Grant.

Consistent with previous grant guidance, dedicated funding is provided for law enforcement and terrorism prevention throughout the country to prepare for, prevent, and respond to pre-operational activity and other crimes that are precursors or indicators of terrorist activity.

Notably, please see below for Preparedness Grant Program Allocations for Fiscal Year 2015 that impact our members:

All preparedness “Notices of Funding Opportunity” can be found at www.grants.gov.  If you have any questions about these grants, please contact Melissa Nee at:  mnee@napo.org.

Please join NAPO on May 13th for our Lobby Day on Capitol Hill.  Use this opportunity to lobby Congressional Representatives and Senators on behalf of your members concerning the issues which affect law enforcement.  Prior to lobbying Capitol Hill, plan to attend NAPO’s Legislative Breakfast for an update on NAPO’s legislative priorities, results to date from the 114th Congress, and to receive handouts to use during Hill visits.  While on Capitol Hill, be sure to stop by NAPO’s Congressional Awards Luncheon in the U.S. Capitol Visitors Center, where several Congressmen and Senators will be recognized for their continued support of Law Enforcement.

NAPO has reserved a block of rooms at JW Marriott Hotel. Room rates are $239 per night.  To make your reservation, please call (800)393-2503, and tell them you are with NAPO.  In order to receive the reduced rate, reservations must be made by April 17. The hotel is expected to sell out, so please make your hotel reservations early.

Please contact Elizabeth Loranger, NAPO’s Director of Events, at (800)322-6278 or eloranger@napo.org, if you have any questions regarding the seminar or hotel arrangements.