NAPO’s Executive Director, Bill Johnson, attended a Coalition to Preserve Retirement Security (CPRS) Board Meeting on July 9, 2014.  Johnson serves as the national Public Safety representative to the Coalition. The Board discussed the state of the mandatory Social Security issue.  The meeting included the Vice Chair of the El Paso County, Colorado Board of County Commissioners, Ms. Amy Lathen, who discussed her group’s desire to enact legislation that would reinstate the Section 218 Option – effectively reestablishing the ability of public employees to opt out of Social Security.  The Senior Vice President of SEGAL, Ms. Cathie Eitelberg, also provided information on the impact of mandatory coverage on state and local budgets.

NAPO supports a long-term solution to Social Security, so long as such a solution does not mandate that all or some state and local government employees, including newly hired ones and their employing agencies, be required to pay Social Security taxes.  Adding presently non-covered public safety workers will not fix the basic problems of Social Security.  While it will bring new workers into the Social Security system, the system will also have to assume a liability for these new workers, which will eventually have to be paid.

NAPO plans to continue to address this issue with the CPRS Board and on Capitol Hill.  We will keep our members updated on the status of our efforts.

If you have any questions about the CPRS Board meeting or mandatory Social Security, please contact Bill Johnson at:  bjohnson@napo.org.

Community Oriented Policing Services (COPS) Improvement and Reauthorization Act:  NAPO stressed the importance of passing this legislation, which would reauthorize the COPS Program for five years and raise the current hiring cap from $75,000 to $125,000.  The COPS Office has been extremely successful in implementing and carrying out its designated objectives.  Since its creation, the COPS Office has assisted over 13,000 of the nation’s 18,000 jurisdictions with over $14 billion in funding to hire more than 125,000 additional officers.  Reauthorizing this program will allow for the continuation of a highly successful program that keeps our communities safe.

Justice and Mental Health Collaboration Act (JMHCA):  NAPO explained that the Mentally Ill Offender Treatment and Crime Reduction Act (MIOTCRA) created the Justice and Mental Health Collaboration Program (JMHCP) to help states and counties design and implement collaborative efforts between criminal justice and mental health systems.  The JMHCA reauthorizes the successful MIOTCRA and extends the JMHCP for five years.  The JMHCP can help law enforcement agencies across the United States in their responsibilities in assisting citizens with mental health issues.

Officer Sean Collier Campus Police Recognition Act:  MIT Police Officer Collier lost his life while protecting both the campus and the greater Boston community. This legislation will honor Officer Collier by ensuring that campus police officers are added to the Public Safety Officers’ Benefits (PSOB) program. Campus police officers serve their communities with integrity and valor, and deserve to be included among those public safety personnel whose survivors are eligible to receive benefits under the PSOB Program.

Social Security Fairness Act:  This bill strikes the Windfall Elimination Provision (WEP) and Government Pension Offset (GPO) formulas currently used to calculate Social Security benefits. Both formulas were enacted in the 1980s because Congress was concerned Social Security paid unintended benefits to workers who had spent most of their careers in “non-covered” jobs.  However, the formulas go too far and penalize workers with split careers who contributed a great deal to Social Security, but retire under their “non-covered” pensions.  By significantly scaling back and reducing Social Security benefits for law enforcement officers and their survivors, as GPO and WEP do, officers and their families are provided much less protection against financial difficulties.

The staffers were very receptive to the above proposals, and NAPO looks forward to continuing to work with each of the offices in the future.  If you have any questions about any of the bills summarized above, please contact Melissa Nee at:  mnee@napo.org

On July 11, 2014, NAPO met with senior staffers for Senator Chris Coons (D-DE).  (Senator Coons is a member of the Senate Judiciary Committee and co-chair of the Senate Law Enforcement Caucus).  NAPO used the meeting as an opportunity to express appreciation for the Senator’s support of legislation that is vital to the law enforcement community, including the following bills:  Bulletproof Vest Partnership Grant Program Reauthorization Act, Justice and Mental Health Collaboration Act, National Blue Alert Act, Justice for Victims of Trafficking Act, Victims of Child Abuse Reauthorization Act, Metal Theft Prevention Act, and the Justice for All Reauthorization Act.

In addition to requesting the Senator’s support for the COPS Improvement and Reauthorization Act & the Social Security Fairness Act, NAPO highlighted our support of the Equity in Law Enforcement Act.  Mirroring the Officer Sean Collier Campus Police Recognition Act, this bill would extend the same Federal benefits to law enforcement officers serving private institutions of higher education that apply to law enforcement officers serving units of State and local government.  This legislation would make these individuals eligible for the same benefits provided to public law enforcement officers, including line-of-duty death benefits under the Public Safety Officers’ Benefits (PSOB) program and bulletproof vest partnership grants through the Department of Justice.  The bill would only apply to officers who are sworn, licensed, or certified to enforce the law within their jurisdiction.

NAPO also briefed the staffers on our proposed modifications to the most recent amendment to the Driver’s Privacy Protection Act (DPPA).  The DPPA requires state motor vehicle departments to receive permission from individuals before their personal motor vehicle record may be sold or released. The most recent DPPA amendment authorizes a private right of action for knowing violations, and a court may award damages in the amount of $2,500 for each time a record was accessed, as well as attorney fees and other litigation costs.  Law enforcement officers are subject to these stringent punishments, even if they did not review files with criminal intent.

NAPO looks forward to continuing to work with Senator Coons and his staff to ensure that our priorities remain at the top of the Congressional agenda.

If you have any questions about any of the bills highlighted above, please contact Melissa Nee at:  mnee@napo.org.

NAPO has pledged our support for the Fairness for Fallen Officers Act (S. 2332), which was introduced by Senator Chris Coons (D-DE) and Senator Rob Portman (R-OH) on May 14, 2014.  This bipartisan legislation will close an unintended loophole in the Public Safety Officers’ Benefits (PSOB) program, and ensure families of fallen officers receive the benefits they deserve. 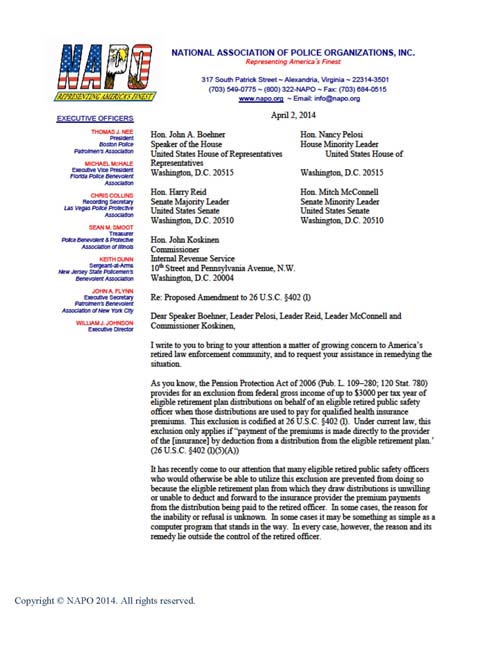 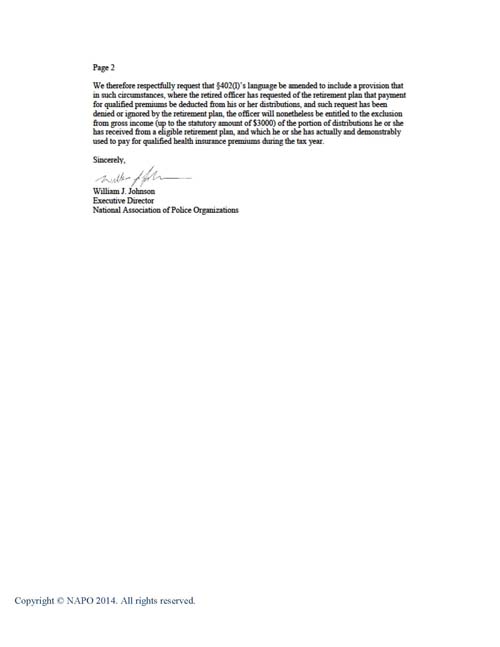