Jesus Cecena brutally took the life of a dedicated public servant and significantly affected the lives of Officer Buggs’ family, friends, co-workers and the entire law enforcement community. NAPO contacted Governor Brown in June 2014 to urge him to keep this ruthless killer behind bars for the safety of all Californians.  Your efforts ensured that this cop-killer will remain behind bars and the community will remain safe.

We are most grateful for your continued support.  If you have any questions about this case, please contact Bill Johnson at:  bjohnson@napo.org.

On September 12, 2014, NAPO pledged our support for the Don’t Tax Our Fallen Public Safety Heroes Act, sponsored by Senator Kelly Ayotte (R-NH).  This legislation clarifies that both federal and state death benefits for the survivors of law enforcement officers killed in the line of duty should be treated the same and not be subjected to federal income tax. Survivor benefits for federal law enforcement officers are currently not subject to federal income tax, but there is some ambiguity about the treatment of these benefits for similar state-based programs.

Senate Minority Leader Mitch McConnell (R-KY) signed on as a cosponsor of the bill on September 8, 2014.  Senator McConnell noted:  “This legislation is about honoring the sacrifices of the front-line in protecting Kentucky communities, state and local law enforcement officers, and ensuring the surviving families of those killed in action are treated the same as federal officers.”

NAPO looks forward to working with Senators Ayotte and McConnell to pass this important legislation.  If you have any questions about this bill, please contact Melissa Nee at:  mnee@napo.org.

NAPO continues to aggressively pursue the passage of the Second Chance Reauthorization Act, as the Senate Judiciary Committee is scheduled to mark-up the bill on September 18, 2014.  On September 12, 2014, NAPO participated in a conference call with senior staffers for the bill’s sponsor, Senator Patrick Leahy (D-VT), to strategize ways forward to ensure passage of the bill.  Teleconference participants agreed to continue to reach out to key members of the Senate Judiciary Committee to request support for the bill.

The Second Chance Reauthorization Act improves state and local grant programs to promote successful prisoner reentry and improve public safety. This legislation continues targeted funding for reentry programs at the state and local level that have been proven to reduce recidivism, lead to better outcomes for those released from prison, and save prison costs.

We encourage you to reach out to your members of Congress to request they sign-on as cosponsors of the legislation, which currently holds strong bipartisan support in both the House and Senate.

On September 8, 2014, NAPO attended the following Senate Homeland Security and Governmental Affairs Committee (HSGAC) hearing:  Oversight of Federal Programs for Equipping State and Local Law Enforcement.  The primary purpose of the hearing was to examine federal programs that enable local police departments to acquire military equipment, such as the Defense Department’s 1033 program for surplus property and grants made through the Department of Homeland Security.

In anticipation of the hearing, NAPO met with senior staffers for Senator Ron Johnson (R-WI) and Senator Patrick Leahy (D-VT) to discuss our views of the 1033 Program.  (Senator Johnson is a member of the Senate HSGAC and Senator Leahy is the Chairman of the Senate Judiciary Committee).  NAPO stressed that the vast majority of equipment provided under the 1033 Program is defensive in nature.  Furthermore, the 1033 Program enables law enforcement departments to garner equipment that they would otherwise be unable to afford.  NAPO highlighted that ending the program would leave law enforcement departments unable to equip their officers with the necessary tools to keep their communities safe.

During the HSGAC hearing, Senator Claire McCaskill (D-MO) said she plans to introduce legislation in the coming weeks to address issues related to surplus military equipment being transferred to law enforcement.  NAPO continues to closely track pending legislation related to the 1033 Program, and we will keep our members updated as bills are introduced.  If you have any questions about this issue, please contact Melissa Nee at:  mnee@napo.org.

On September 8, 2014, NAPO attended the monthly National Criminal Justice Association (NCJA) Brown Bag.  Senior staffers for Senators Sheldon Whitehouse (D-RI) and Robert Portman (R-OH) attended the Brown Bag to discuss a bill that the Senators are drafting that focuses on drug addiction and recovery.  The draft bill includes language on treatment alternatives to incarceration.  There are also provisions to ensure that law enforcement officers have access to training on how to administer naloxone.  NAPO will keep our members updated on the status of the legislation.

Additionally, a Senior Policy Advisor for Criminal Justice at the Office of National Drug Control Policy (ONDCP) discussed top priorities for drug control strategy.  The following includes a few of the top priorities that were discussed:

NAPO appreciated the opportunity to participate in the NCJA Brown Bag.  If you have any questions about the above topics of discussion, please contact Melissa Nee at:  mnee@napo.org.

Per last week’s Washington Report, on August 27, 2014, Congressman Adam Schiff (D-CA) announced that he is circulating a letter to his colleagues, which will be sent to Attorney General Eric Holder, urging the Department of Justice to help fund local police departments’ purchase of small body-worn cameras in order to increase transparency, decrease tensions between police and community members, and create a record of events.

NAPO looks forward to continuing to discuss this issue with members of Congress as discussions relating to body camera policies move forward.  If you have any questions about these meetings, please contact Melissa Nee at:  mnee@napo.org.

On September 10, 2014, NAPO joined members of the Pension Protection Network at a Capitol Hill event hosted by the Urban Institute entitled:  “Reform Options for State and Local Pension Plans.”

Senator Orrin Hatch (R-UT) opened the briefing by highlighting his efforts to pass the Secure Annuities for Employee (SAFE) Retirement Act of 2013.  The Urban Institute has given high marks to Senator Hatch’s legislation.  The following members of the Urban Institute participated in the briefing:  Richard Johnson, Director of the Program on Retirement; Kim Rueben, Director of the State and Local Finance Initiative; and Eugene Sterling, Richard B. Fisher Chair and Institute Fellow.

NAPO continues to monitor the SAFE Retirement Act, as there are concerns that it could negatively impact public employees and their pensions.  We will continue to monitor the bill, and provide our members with regular updates on the status of the legislation.

If you have any questions about this briefing, please contact Melissa Nee at:  mnee@napo.org. 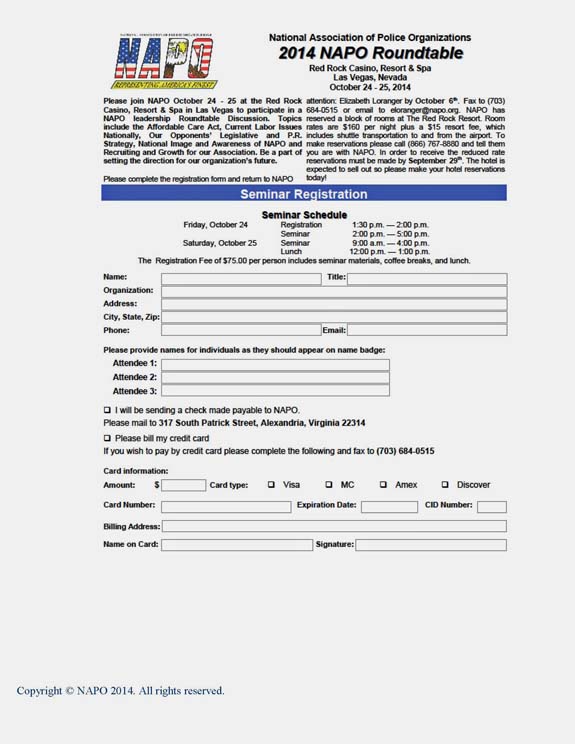