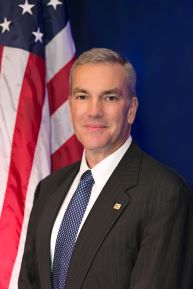 Johnson has served as NAPO’s Executive Director since January, 2002.  He also serves as legal counsel to the Association.  As NAPO’s Executive Director, Johnson is responsible for the day to day operations of the largest trade association in the United States representing active duty law enforcement officers.  He also presents written and oral testimony before Congress, and frequently meets with Members of Congress as well as cabinet-level appointees in the presidential administration.  Johnson is also responsible for the writing and filing of amicus curiae briefs in the Supreme Court and various appellate courts around the country.  He is a frequent speaker and moderator at law enforcement and legal education seminars.  Johnson holds the Certified Association Executive or “CAE” credential, awarded by the American Society of Association Executives.  He is a registered federal lobbyist.

Johnson is a former law enforcement officer and prosecutor, having served with a small police department in Maine, and, after attending law school, the Miami, Florida State Attorney’s Office.  Johnson was responsible for prosecuting a wide range of felony cases and also served as the designated prosecutor for cases involving mentally ill defendants, where competency and/or sanity claims were at issue.   Johnson has also served as a law clerk to an Article I federal judge; a basic civil law teacher for inmates nearing release at a men’s correctional institution; and an instructor for Miami area police academies and for new prosecutors at the State Attorney’s Office.

The National Association of Police Organizations represents some 1,000 professional police associations and units and 241,000 sworn officers throughout the United States.  NAPO serves its members through the advancement of federal legislation and policy, legal advocacy, and education.