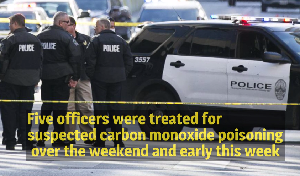 On July 16, NAPO Executive Director Bill Johnson was quoted in a My Statesman (from the Austin American-Statesman) article entitled, “Carbon monoxide illness linked to Ford SUVs hits Austin police hardest”. The article focuses on the ongoing carbon monoxide issues with the Ford Explorer Police Interceptor and how the Austin, Texas police department has the highest numbers of officers suffering from carbon monoxide poisoning in the nation. Johnson spoke on why police officers are being exposed to this deadly gas at such high rates.

“Bill Johnson, executive director for the National Association of Police Organizations in Alexandria, Va., said there are no statistics he’s aware of that show which vehicles are most common among law enforcement, but departments have shifted to SUVs ‘because they carry more equipment, carry more people.’

He said law enforcement officials are likely more susceptible to carbon monoxide exposure than other drivers because their vehicles are left idling while they fill out reports, talk to someone or safeguard traffic.

‘Exposing the occupants and, from our point of view, police officer drivers, to poison is a grave concern of ours,’ Johnson said. ‘You’re endangering the safety and the lives of our officers.’” The full article is available online.