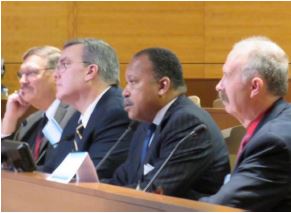 In his testimony, Johnson made the following recommendations to the panel:

NAPO In the News

Last week, NAPO’s Executive Director, Bill Johnson, was quoted in a Wall Street Journal article on college requirements for police.  The reporter noted that some law enforcement experts have argued against requiring a degree, as some say the degree requirement makes it difficult to build a force that is representative of the communities they serve.  Johnson noted that:

“Some of the critics of policing, especially since the events of the summer, one of the things that they point out sometimes is that the department doesn’t represent the community and sometimes the same critics are insistent on requiring a college degree.”

Johnson was able to build on this comment during the aforementioned Task Force Listening Session (see above).

The full article is available at the following link:  http://www.wsj.com/articles/college-rule-for-police-at-issue-1423788045.

Johnson was also quoted in a Boston Globe article regarding police accountability measures.  When asked about body cameras, Johnson explained that as important details are considered regarding body camera policy, “body camera legislation is the response to the police incidents most likely to be successful. Lawmakers on both sides of the aisle support body camera bills, and police unions and officers back cameras, too.”

The full article is available at the following link:  http://www.bostonglobe.com/news/nation/2015/02/15/police-accountability-measures-flood-state-legislatures-after-ferguson-staten-island/8tC3efOX4WwDtGjepkIZVI/story.html.

NAPO continues to stress the importance of including state and local agencies, as well as law enforcement leadership, in discussions regarding body camera requirements.  NAPO looks forward to continuing to discuss this issue with members of Congress as legislation related to body cameras is considered.

On February 11, 2015, the Senate Finance Committee passed the Don’t Tax Our Fallen Public Safety Heroes Act by a voice vote. This legislation clarifies that both federal and state death benefits for the survivors of law enforcement officers killed in the line of duty should be treated the same and not be subjected to federal income tax. Survivor benefits for federal law enforcement officers are currently not subject to federal income tax, but there is some ambiguity about the treatment of these benefits for similar state-based programs.

NAPO continues to work closely with senior staffers for the bill’s sponsors, Senator Kelly Ayotte (R-NH) and Congressman Erik Paulsen (R-MN), to pass this bill.  We will keep our members updated on the status of this legislation.  If you have any questions about our efforts, please contact Melissa Nee at:  mnee@napo.org.

Last week, NAPO pledged our support for the Ax the Tax on Middle Class Americans’ Health Plans Act, sponsored by Congressman Frank Guinta (R-NH).  (NAPO’s letter of support is attached to this report for your convenience and review).

We look forward to working with Congressman Guinta and his staff to pass this important legislation.  If you have any questions about our efforts to repeal the “Cadillac Tax,” please contact Melissa Nee at:  mnee@napo.org.

Last week, NAPO pledged our support for the Thin Blue Line Act, sponsored by Congressman David Jolly (R-FL).  (NAPO’s letter of support is attached to this report for your convenience and review).  This bill would make the murder of a police officer, firefighter, or first responder an aggravating factor in death penalty determinations.  This would be applicable whether they were murdered on duty, because of the performance of their duty, or because of their status as a public official.  This bill would encompass every police officer, whether federal, state, or local, as well as any firefighter or first responder.  The only requirement is that the homicide provide federal jurisdiction.

These cases would be applied to capital murder offenses and would be tried in federal court.  Current federal law only cites the homicide of a federal public servant.  This bill would close that loophole and treat all law enforcement officers equally under federal law.

This bill is critical, as law enforcement officer assaults, injuries, and deaths have increased sharply in recent years.  Establishing stricter penalties for those who harm law enforcement officers will deter crime.  Any persons contemplating harming an officer must know that they will face serious punishments. Increased penalties make important differences in the attitudes of criminals toward public safety officers, and ensure protection for the community.

On February 13, 2015, NAPO was recognized as a supporter of this important legislation in the following Sunshine State News article:  http://www.sunshinestatenews.com/story/david-jolly-introduces-thin-blue-line-act-cops-firefighters-killed-federal-cases.

NAPO looks forward to working with Congressman Jolly and his staff to pass this bill.  If you have any questions about our efforts, please contact Melissa Nee at:  mnee@napo.org.

Last week, NAPO pledged our support for the Equal Treatment of Public Servants Act, sponsored by Congressman Kevin Brady (R-TX).  (NAPO’s letter of support is attached to this report for your convenience and review).

This legislation would repeal the Windfall Elimination Provision (WEP), and correct Social Security benefits for public servants. The main tenets of the legislation are as follows:

The loss of income caused by the WEP formula is a financial strain on law enforcement officers and their families, an additional strain that those who spent their careers on the front lines protecting our nation’s communities do not need.  This bill will guarantee public servants receive the benefits they earned while they paid into Social Security.

NAPO looks forward to working with Congressman Brady to pass this bill during the 114th Congress.  If you have any questions about the Equal Treatment of Public Servants Act, please contact Melissa Nee at: mnee@napo.org.

On February 4, 2015, the Electronic Communications Privacy Amendments Act was submitted in the Senate by Senators Mike Lee (R-UT) and Patrick Leahy (D-VT).  Congressmen Kevin Yoder (R-KS) and Jared Polis (D-CO) sponsored the House version of the bill, the E-mail Privacy Act.  This legislation is intended to bring outdated Federal electronic privacy laws into the digital age. The bill makes changes to the Electronic Communications Privacy Act to establish a search warrant requirement for the government to obtain Americans’ e-mails and other electronic communications from third-party service providers.

Last week, NAPO sent the attached letters of opposition to these bills.  NAPO is very concerned that this legislation adds unnecessary warrant requirements.  Warrants take much longer to secure as compared with the current practice of officers obtaining a court order.  This is of particular concern in time critical cases, such as active kidnapping or child abduction cases.  Moreover, warrants require an affidavit, which generally becomes public.  These documents have the potential to expose law enforcement and informant identities and methods.

The National Blue Alert Act would create a nationwide alert system to apprehend violent criminals who have injured or killed police officers. This bill reaffirms NAPO’s commitment to ensuring the safety of our law enforcement men and women and the communities they serve to protect every day.

If you have any questions about our efforts to pass this legislation, please contact Melissa Nee at:  mnee@napo.org.

NAPO has worked closely with senior staffers for Senator Cornyn to advance the Justice for Victims of Trafficking Act, which would boost support for and protection of victims of human trafficking by increasing law enforcement resources, enhancing victims’ services, and increasing penalties in an effort to combat child sex trafficking, child pornography, sexual exploitation, and human trafficking.

We were grateful that Chairman Grassley added the Justice for Victims of Trafficking Act to the Senate Judiciary Committee’s mark-up agenda on February 12, 2015.  The bill was held over last week, but we plan to use the coming weeks to continue to build support for the legislation.  (The Attorney General nomination was also added to the February 12th Committee agenda, but was held over as well).

If you have any questions about the NCJA Brown Bag or the Justice for Victims of Trafficking Act, please contact Melissa Nee at:  mnee@napo.org.

Last week, NAPO attended a hearing held by the House Judiciary Committee’s Crime, Terrorism, Homeland Security and Investigations Subcommittee on “Federal Asset Forfeiture.” Members of the subcommittee explored current asset forfeiture procedures and practices and the Justice Department’s recently revised guidelines governing the circumstances under which state seizures will be “adopted” by the federal government for forfeiture. Through adoption, the federal government “adopts” forfeitures made by state and local police departments. In return, federal authorities keep a portion of the proceeds and return a large portion of it to the local law enforcement that made the seizure.

The following witnesses testified at the hearing:

Shortly before the hearing, the Justice Department issued more guidance on a new policy, announced in January, to curb the use of a controversial type of civil asset forfeiture.  The new policy ends the practice that allowed state and local police to seize vehicles, valuables, cash and other monetary instruments, and then share the proceeds with federal agencies that “adopt” the seizures.

NAPO is very concerned about the possible loss of significant funding that could result from new policies on civil asset forfeiture, especially as state and local police are being asked to do more and more each year.

On February 9, 2015, the Senate voted 92-0 to confirm the nomination of Michael Botticelli as Director of the Office of National Drug Control Police (ONDCP).

A component of the Executive Office of the President, ONDCP was created by the Anti-Drug Abuse Act of 1988.  ONDCP advises the President on drug-control issues, coordinates drug-control activities and related funding across the Federal government, and produces the annual National Drug Control Strategy, which outlines Administration efforts to reduce illicit drug use, manufacturing and trafficking, drug-related crime and violence, and drug-related health consequences.

NAPO looks forward to continuing to work ONDCP in the future.  If you have any questions about this confirmation vote, please contact Melissa Nee at:  mnee@napo.org. 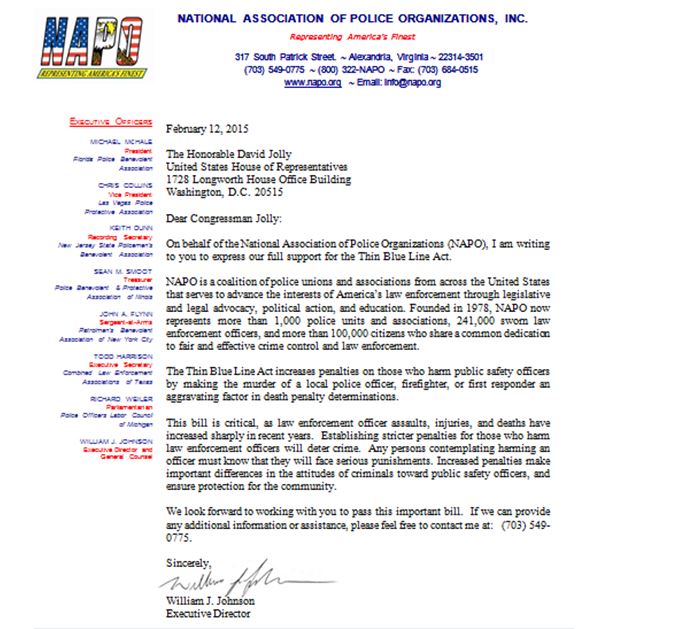 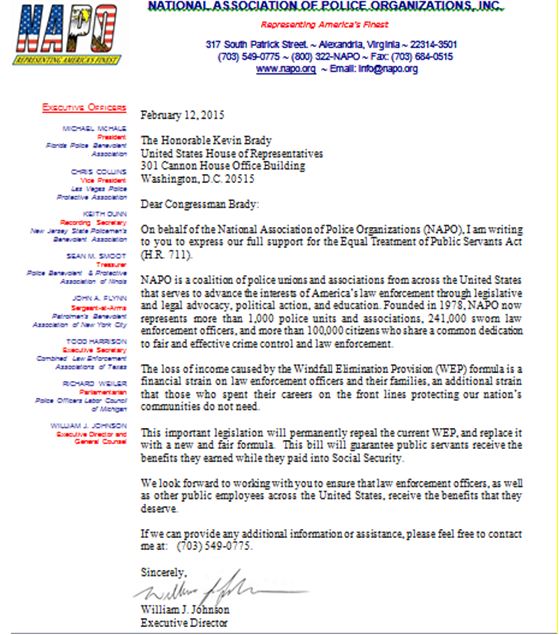 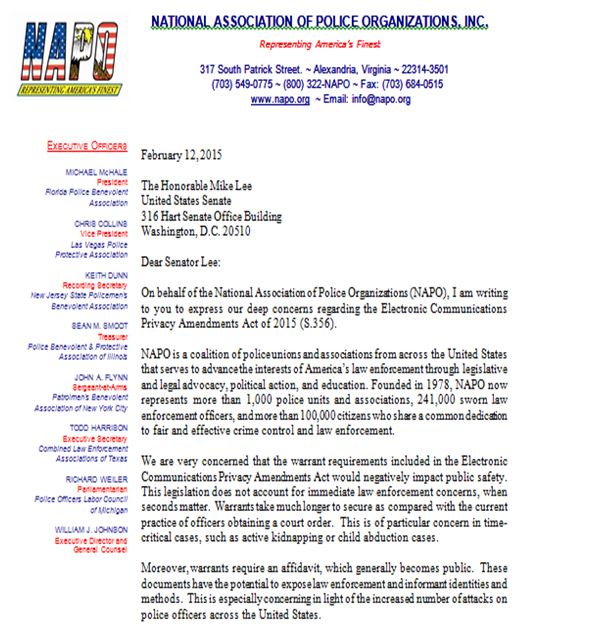 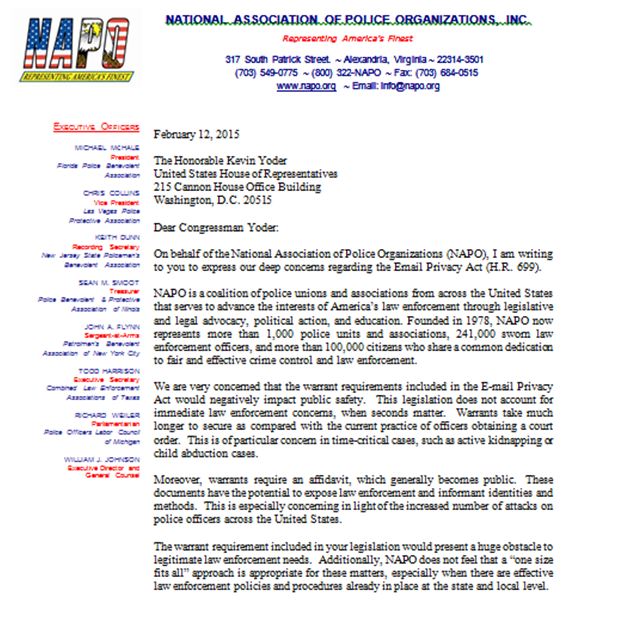 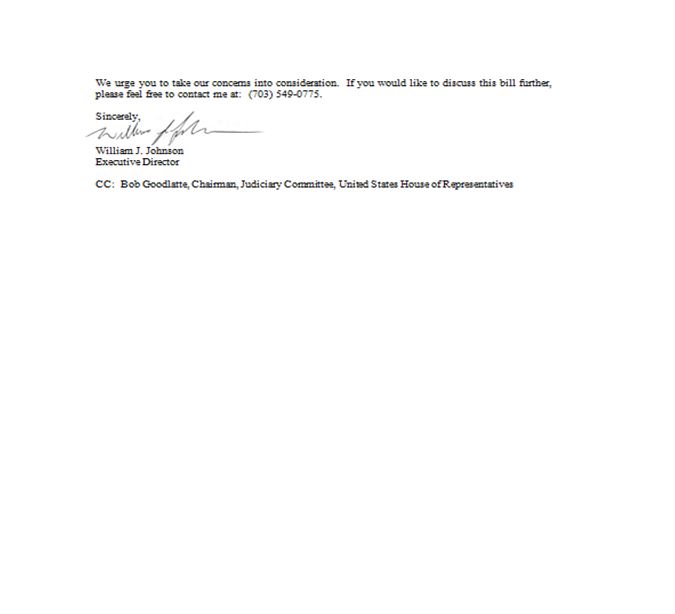