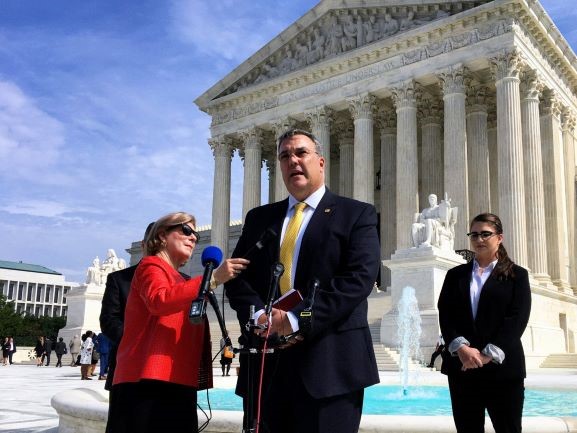 On October 2, the U.S. Supreme Court heard oral arguments for the case of Vernon Madison v. State of Alabama for which NAPO filed an amicus curiae (or “friend of the court”) brief. In this case, Vernon Madison ambushed and murdered Mobile, Alabama Police Corporal Julius Schulte with two gunshots to the back of the officer’s head, as the officer was trying to protect Madison’s girlfriend from harm.  This was in April of 1985 and Madison was subsequently convicted of the murder and sentenced to death.

Madison’s lawyers now assert that he cannot be put to death because he suffers from dementia and claims that he can no longer remember the murder. His lawyers argued before the Court that this makes him mentally incompetent and thus can no longer be executed for the crime.

At the press conference, Johnson stated:

“Justice delayed truly is justice denied in this case.  When you see so many police officers around the country murdered, executed in cold blood… I think the time has come. We don’t take anything about this lightly, the imposition of the death penalty against anyone.”

But after more than 30 years, three trials and several trips to the Supreme Court, “the time really has come to comply with the sentence that was imposed.”

Johnson also stated that he is not sure if the Madison execution case will set a precedent, but there is a danger “that if you delay it long enough the condition of the person on death row is going to deteriorate whether from old age or something else. Eventually, the lawyers will be able to argue that even if once proper to execute him or her, it is no longer permissible because he or she is in bad physical shape.”

The State of Alabama reached out to NAPO for assistance in this case, and we filed the brief to assist Alabama and remind the Court of the various state and federal laws (including many NAPO has worked on at the federal level) which provide enhanced punishment (including the death penalty) for assaults and murders of law enforcement officers.  NAPO points out in the brief that these enhanced punishments are justified because of the high value society rightly places on the lives and services of officers, and the dangerous conditions under which they serve.

NAPO’s brief also notes that Corporal Schulte is indeed remembered by his brother and sister officers:  His name is engraved on the National Memorial in Washington.

Below are links to news coverage of the court case and the press conference, including video links:

The National Association of Police Organizations (NAPO) is a coalition of police unions and associations from across the United States that serves to advance the interests of America’s law enforcement through legislative and legal advocacy, political action, and education. Founded in 1978, NAPO now represents more than 1,000 police units and associations, 241,000 sworn law enforcement officers, and more than 100,000 citizens who share a common dedication to fair and effective crime control and law enforcement.