NAPO has been working with the Treasury Department, Members of Congress and members of the pension community on Treasury regulations and the enactment of Normal Retirement Age rules. Earlier this year NAPO met with key policy makers within the Treasury Department; Mark Iwry - the Senior Advisor to the Secretary and the Deputy Assistant Secretary for Retirement and Health Policy, George Bostick - the Benefits Tax Counsel, Harlan Weller - the Actuary in the Office of Tax Policy, Bill Bortz - the Associate Benefits Tax Counsel in the Office of Tax Policy and Bill Evans the Attorney-Advisor in the Office of Benefits Tax Counsel.  NAPO addressed the concerns of rank-and-file law enforcement on the pending implications of the proposed January 1, 2013 enactment of Normal Retirement Age guidelines.

On April 18th, Treasury released updated guidance making modifications to the 2007 regulations. These changes are an important step in the right direction for NAPO's membership for several reasons.

First, the "safe harbor" provision that allows public safety to qualify for "Early Unreduced Retirement" will now encompass pension plans that are combined with other plans. Therefore, officers will no longer be forced to wait longer to retire and receive benefits. NAPO has worked closely with the offices of Senator Herb Kohl (D-WI), Representative Bill Pascrell (D-NJ), Representative Ron Kind (D-WI) and Representative Sean Duffy (R-WI) to address this specific issue. We would like to thank them for their hard work and leadership.

Secondly, this notification clarifies in-service distributions for public safety. As long as an individual is participating in a plan and is older than 62, they are entitled to collect in-service distribution. We are aware that this does not solve all the problems with this issue and will continue to seek a legislative fix.

Finally, and most importantly, for the immediate future, the enactment date for the IRS Normal Retirement Age has once again been postponed. The new date of enactment has been moved to January 1, 2015.

NAPO will continue to seek a full exemption for public safety from the Normal Retirement Age and will work to raise awareness of the issues of HELPS Benefits. (If an officer retired under "Early Unreduced Retirement" then they do not qualify for HELPS Benefits. Under the HELPS provision, a public safety officer must have retired at "Normal Retirement Age" in order to obtain the privilege to use up to $3,000 from their retirement savings on a pre-tax basis for use toward health care insurance and long-term care insurance premiums.)

Please contact NAPO's Director of Government Affairs, Rachel Hedge via email (rhedge@napo.org) or phone (703-549-0775) if you have any questions regarding this or any other legislative issues.

Sometimes it is as important to fight for the prevention of legislation as it is to support it.

When the Senate considered the Violence Against Women Act (VAWA), S. 1925 NAPO was once again the premier law enforcement organization to take a position and oppose two harmful amendments to the bill.

The first was Senator Tom Coburn's (R-OK) Amendment #2085 (S.A.2085), which identifies unnecessary duplication within the Department of Justice. The amendment would have a negative impact. Superficially it seems like a good piece of legislation. However, it is constructed in a one-size-fits-all manner and would have a negative impact on all Justice Programs. S.A.2085 is particularly harmful to rank-and-file because it requires the Department of Justice to cut its grant programs by at least $780 million. This cut would harm key programs that benefit law enforcement. Additionally, it provides for these cuts to be made without Congressional input.

The second was John Cornyn's (R-TX) Amendment #2086 (S.A.2086), better known as the Safer Act, The Sexual Assault Forensic Evidence Registry Act of 2012. S.A. 2086 takes funding away from state and local law enforcement crime laboratories and requires certain grantees to send all rape kits to regional crime labs. In so doing, jurisdictions must divert time and resources away from their basic responsibilities. The language from the amendment was incorrect as written. It unintentionally decreases the amount of funding going to state and local crime laboratories that have already been appropriated in FY12 and proposed in FY13 funding bills. This would divert 7 percent of funding ($8.19 million for FY13).

Due to NAPO's advanced opposition to S.A. 2085 and our work to educate members on its negative repercussion for law enforcement, the Coburn Amendment was not considered in the series of floor votes. This is one of the rare instances where what we prevent from happening was more important that what we can make happen.

The Cornyn Amendment failed to reach the necessary 60 votes needed for passage by 50 – 48 with 2 members not voting. To see how your Senator voted please click here.

The 112th Congress is nearly three-quarters complete and a vast majority of the votes that NAPO has deemed important have resulted in NAPO successes. This would not be possible without our membership continuing to contact members of Congress. Thank you for your hard work. It is important and appreciated.

Even though the bill was reduced by $1 billion below FY12 enacted levels, the cuts were not imminent for state and local law enforcement. COPS Hiring received $215 million to hire or retain approximately 1,700 police officers. This is $15 million more than the Senate proposed for FY12 and $49 million more than FY12 appropriations.  The Byrne JAG program received $392 million.

In the 112th Congress, Members of the Senate have been strong supporters of the COPS Hiring Program and the Byrne JAG Program. NAPO was successful in increasing the number of Members to sign in support of the COPS Hiring Program and Byrne JAG Program in FY13 with Dear Colleague letters; this led to a direct increase in support and funding for both programs throughout Congress.

The House CJS appropriations Subcommittee Chaired by Representative Frank Wolf (R-VA) and Ranking Member Chaka Fattah (D-PA) passed by unanimous voice vote its FY13 funding bill. The Senate and the House are working under different spending limits, a point that will need to be negotiated. The House is working with a smaller budget. They included $40 million for the COPS Hiring Program and the Byrne JAG program was level funded at $370 million.

Even though House allocations for both of these programs are lower than the Senate they are still an improvement over last year, leaving the Senate in a better bargaining position for conference negotiations.

Other programs of importance include the Bulletproof Vest Partnership which received $24 million in the Senate and $20 million in the House. The VALOR (Preventing Violence Against Law Enforcement and Ensuring Officer Resilience and Survivability) initiative received $5 million in both chambers. Rank-and-file directly benefits from this program by eligibility for education, training, assistance and resource materials.

Funding for FY13 is on schedule this year. However, it is yet to be determined when the chambers will conference and pass FY13 funding bills. NAPO will continue to bring you updates as they become available.

Common Law offers a fresh twist on the traditional buddy cop drama. The 12 episode one-hour series stars Michael Ealy and Warren Kole as two cops with a problem – each other.  As the LAPD's finest detectives they have an impeccable track record in the Robbery-Homicide division, but after one argument too many their captain places them in mandatory couples therapy. Will a lack of communications skills end these partner's careers as crime fighters? We soon learn that a successful relationship doesn't mean you have to like the same things; you just have to hate the same things…and these guys hate criminals. Common Law premieres Friday, May 11, 10/9C.

To celebrate this partnership, Ealy and Kole will present at the 19th Annual TOP COPS Awards on Saturday, May 12 at the Mayflower Hotel in Washington, D.C.

USA Network salutes NAPO, and all of the men and women working in law enforcement today. 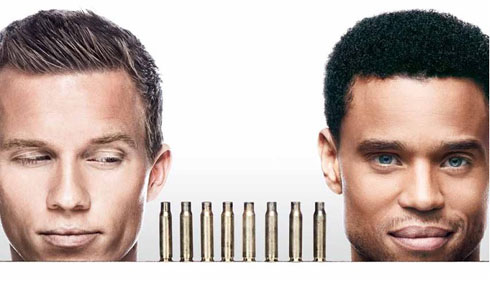