On November 25, 2014, a Grand Jury decided that there was not enough probable cause to file any charges against Police Officer Darren Wilson in the death of Michael Brown.

We encourage you to review the following piece, which debunks the many myths surrounding the incident in Ferguson: https://www.napo.org/files/6014/1703/5808/The_Myths_of_Ferguson.pdf.  (The paper is also attached to this report for your convenience and review).

If you have any questions about NAPO’s response to the Grand Jury’s decision, please contact Bill Johnson at:  bjohnson@napo.org.

On November 26, 2014, NAPO sent the attached letter of support for Congressman Erik Paulsen’s (R-MN) “Don’t Tax Our Fallen Public Safety Heroes Act,” a companion bill to Senate legislation, which was also endorsed by NAPO.  The Senate bill passed the Senate without opposition on September 18, 2014.

James Zadroga 9/11 Health and Compensation Reauthorization Act:  Each of the aforementioned members of Congress is a cosponsor of the James Zadroga 9/11 Health and Compensation Reauthorization Act.  NAPO expressed appreciation for the support the members have given to this important bill.  The Zadroga bill’s two critical programs providing medical treatment and compensation for 9/11 heroes – the World Trade Center Health Program and the September 11th Victim Compensation Fund – are set to expire in October 2015 and October 2016 respectively. This legislation would continue these programs for 25 more years, through 2041.

NAPO appreciated the opportunity to meet with each of the staffers, and we look forward to continuing to work with them in the future.  If you have any questions about any of the bills summarized above, please contact Melissa Nee at:  mnee@napo.org.

On November 24, 2014, NAPO met with Congressman Richard Neal’s (D-MA) staff.  In addition to discussing the bills listed above, NAPO discussed the Equal Treatment of Public Servants Act of 2014 (H.R. 5697), which Congressman Neal introduced with Congressman Kevin Brady (R-TX) on November 13, 2014.  This legislation would repeal the Windfall Elimination Provision (WEP), and correct Social Security benefits for public servants.  The main tenets of the legislation are below: 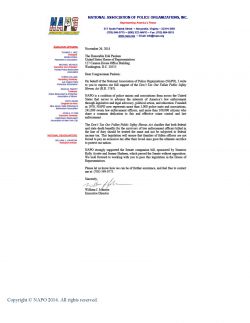 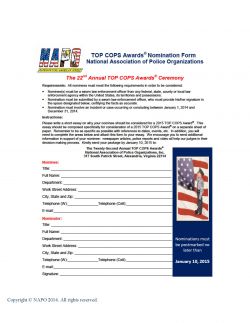