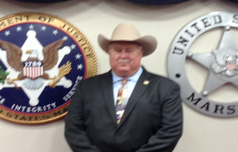 On March 12, 2014, Gary Blankinship was sworn-in as the United States Marshal for the Southern District of Texas.   Mr. Blankinship, a former TOP COPS Award® winner and Area Vice President of NAPO, has spent his career serving and protecting the citizens of Texas.

Gary Blankinship has served in law enforcement for over 35 years. Mr. Blankinship was employed by the Houston Police Department from 1982-2012, where he worked in the position of Senior Police Officer.  Prior to his service with the Houston Police Department, Mr. Blankinship was employed by the Harris County Sheriff’s Department.  He also founded the Assist the Officer Foundation following the death of his partner to provide short-term, immediate financial assistance for officers critically injured or disabled in the line of duty.

Over the past week, NAPO met with staffers for Congressman Ed Pastor (D-AZ) and Congresswoman Ann Kirkpatrick (D-AZ) to request support for the following pieces of legislation:

Justice and Mental Health Collaboration Act:  NAPO explained that the Mentally Ill Offender Treatment and Crime Reduction Act (MIOTCRA) created the Justice and Mental Health Collaboration Program (JMHCP) to help states and counties design and implement collaborative efforts between criminal justice and mental health systems.  The JMHCA reauthorizes the successful MIOTCRA and extends the JMHCP for five years.  The JMHCP can help law enforcement agencies across the United States in their responsibilities in assisting those, and dealing with citizens with mental health issues.

Officer Sean Collier Campus Police Recognition Act:  NAPO provided background on the Officer Sean Collier Campus Police Recognition Act, which amends the Omnibus Crime Control and Safe Streets Act of 1968 by adding campus police officers to the Department of Justice’s Public Safety Officers’ Benefits Program.  This bill defines a “campus police officer” as a police officer who is authorized to enforce the criminal laws and is employed by an institution of higher education.

Community Oriented Policing Services (COPS) Improvement and Reauthorization Act:  NAPO stressed the importance of passing this legislation, which would reauthorize the COPS Program for five years and raise the current hiring cap from $75,000 to $125,000.  Additionally, the President’s FY 2015 Budget includes $247 million for the COPS Hiring Program.  NAPO has been advocating for the COPS Hiring Program to be funded at a minimum of the amount requested by President Obama.

The staffers were receptive to the above proposals, and we look forward to working with them on these legislative priorities.

On March 13, 2014, NAPO attended a White House event, where President Obama signed a Presidential Memorandum directing Secretary of Labor Tom Perez to update and modernize America’s overtime pay system, so that millions of salaried workers will have the protections of overtime pay.

At the signing, the President explained the necessity of fixing our overtime pay regulations:

“Today, millions of Americans aren’t getting the extra pay they deserve.  That’s because an exception that was originally meant for high-paid, white-collar employees now covers workers earning as little as $23,660 a year. So if you’re making $23,000, typically, you’re not high in management.  If your salary is even a dollar above the current threshold, you may not be guaranteed overtime.  It doesn't matter if what you do is mostly physical work like stocking shelves, it doesn't matter if you’re working 50 or 60 or 70 hours a week -- your employer doesn't have to pay you a single extra dime.”

“And I think that’s wrong. It doesn’t make sense that in some cases this rule actually makes it possible for salaried workers to be paid less than the minimum wage. It’s not right when business owners who treat their employees fairly can be undercut by competitors who aren’t treating their employees right. If you’re working hard, you’re barely making ends meet, you should be paid overtime. Period. Because working Americans have struggled through stagnant wages for too long.”

President Obama was joined on stage at the event by more than a dozen middle-class workers and small business owners from across the country.

NAPO will keep our members updated on the status of this issue.

NAPO Supports the SAVE Act

On March 11, 2014, NAPO pledged our support for the Stop Advertising Victims of Exploitation (SAVE) Act, which was introduced by Senator Mark Kirk (R-IL).  The legislation will make it unlawful to sell or commercially promote an advertisement that facilitates kidnapping; trafficking or exploitation of children; sexual abuse or illegal sex; pimping, prostitution, child sex abuse; and trafficking.  The legislation will allow the U.S. Attorney to shut down advertisements on websites promoting underage sex and, if convicted, send offenders to prison for up to five years.

During a March 10th press conference, Senator Mark Kirk (R-IL) and Cook County State’s Attorney Anita Alvarez highlighted the need for a federal-local partnership to end sex trafficking in the United States, including efforts to stop websites like Backpage.com from facilitating the trafficking through online sex ads.

“As President Obama has said, it’s time to call human trafficking what it really is – modern day slavery,” Senator Kirk said.  “Illinois was the first state in the nation to ratify the 13th amendment that abolished slavery – it makes sense for Illinois to lead the nation in a bipartisan effort to end human trafficking.  We can start by putting an end to sex ads on websites like Backpage.com.”

According to the University of Illinois, between 16,000 and 25,000 women and girls are involved in commercial sex trade annually in the Chicago metropolitan area.  One-third get involved in prostitution by age 15 while 62 percent are involved by age 18.  According to the National Association of Attorneys General, Backpage.com—owned by Michael Lacey and Jim Larkin of Phoenix, Ariz.—is responsible for more than 70 percent of prostitution advertising in the United States.  Backpage's "adult services" section is notorious for advertising on behalf of child sex traffickers.

The SAVE Act would allow the federal government to prosecute Backpage.com and any other website that facilitates the victimization of children through commercial advertising.  Current law unfairly protects Backpage.com from prosecution simply because they exist online.

“Everyone in America should be outraged that Michael Lacey and Jim Larkin can make millions by victimizing young women,” Senator Kirk added.  “It’s time to bring Lacey and Larkin to justice.”

NAPO will keep our members updated on the status of this bill.

On March 10, 2014, NAPO attended a briefing hosted by the Department of Justice’s Office of Justice Programs (OJP), along with the Office of the Violence Against Women Act (OVW), and Community Oriented Policing Services (COPS) Office.  The briefing focused on the President’s Fiscal Year 2015 Budget.

The President’s Budget provides $27.4 billion in discretionary funding for the Department of Justice to fund core law enforcement needs, safe and secure prisons, and other Federal, State, and local programs.

Most pertinent to our members, the Budget includes $274 million to support evidence-based community policing in the nation’s local law enforcement agencies. Of the amount provided, $247 million is for the hiring and retention of approximately 1,300 police officers and sheriffs’ deputies across the United States.

NAPO will continue to keep our members updated on the appropriations process as it moves forward.