In a big victory for NAPO and law enforcement officers across the country, Congress passed the Bulletproof Vest Partnership (BVP) Grant Program Reauthorization Act (S. 125) on May 10th and it was signed into law by the President on May 16th.  We thank Senator Patrick Leahy (D-VT) and Congressman Frank LoBiondo (R-NJ) for their leadership on this important issue, which was essential to us getting this bill passed into law. It is fitting that the bill was passed during National Police Week, as thousands of officers from across the country gathering in Washington, D.C. to remember those who paid the ultimate sacrifice.

The BVP Grant Program provides a federal matching grant to pay for 50% of the cost of new body armor for officers anywhere in the country. Since its inception in 1998, the program has awarded more than 13,000 jurisdictions a total of $412 million in federal funds for the purchase of over a million vests. This Act extends the authorization of the Program through fiscal year 2020, and ensures that officers are provided with the life-saving protection they need.

NAPO expended every possible effort to see this bill passed into law. We now turn our focus to ensuring that the program gets fully funded to ensure that all of America’s law enforcement officers are provided with the life-saving protection they need.

On May 16th, the President signed into law the Fallen Heroes Flag Act, which will allow members of Congress to honor a deceased public safety officer who died in the line of duty by providing to the family, at their request, a Capitol-flown flag.  The flag will be accompanied by a certificate expressing a message of sympathy signed by either the Speaker of the House or Senate Majority Leader and the Senator or Representative providing the flag.

The Fallen Heroes Flag Act will allow members of Congress to honor these brave individuals for their heroism and extend a gesture of sympathy and gratitude to the immediate family.  The passage of this bill is a victory for NAPO, especially at a time when the law enforcement profession continues to come under fire.  It is only right that Congress recognize the valor of the officers who made the ultimate sacrifice for the protection of our communities.

NAPO thanks Senator Roy Blunt (R-MO) and Congressman Peter King (R-NY) for their leadership on this bill and their dedication to the law enforcement profession.

NAPO’s President, Mick McHale, Executive Director, Bill Johnson, elected officers and executive board members joined Representatives David Jolly (R-FL), Rich Nugent (R-FL) and several other Members of Congress outside the U.S. Capitol on May 13th, to call for the passage of the Thin Blue Line Act.

“There is a serious and growing trend of armed attacks on law enforcement officers just because of the uniform they wear. Tepid responses to the murders of police officers do nothing to discourage future attacks, which is why the Thin Blue Line Act is so important,” stated Mick McHale.  “Establishing stricter penalties for those who harm law enforcement officers will deter violence against officers and help keep communities safe, which is why it is vital that Congress pass this legislation.”

Representative Jolly’s Thin Blue Line Act (H.R. 814) currently has 48 cosponsors in the House and its companion bill in the Senate (S. 2034), sponsored by Senator Pat Toomey (R-PA) has 23 cosponsors.

The Thin Blue Line Act would make the murder of a police officer, firefighter, or first responder an aggravating factor in death penalty determinations and would be applicable whether the person is murdered on duty, because of the performance of their duty, or because of their status as a public official.  It covers every police officer whether federal, state, or local as well as any firefighter or first responder.  The only requirement is that the homicide provides federal jurisdiction.  This includes the following:

The Thin Blue Line Act is a priority for NAPO and we will continue to work with Representative Jolly and Senator Toomey to pass this important legislation.  If you have any questions about this bill, please contact Andy Edmiston at aedmiston@napo.org. 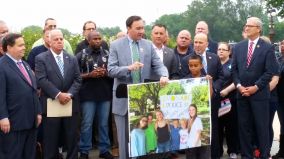 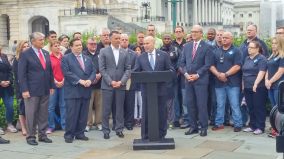 On the Hill: NAPO’s Lobby Day and Legislative Luncheon

NAPO’s annual lobby day and Legislative Recognition Luncheon on May 12th was a success.  NAPO members from across the country participated, lobbying their respective Senators and Representatives on our top legislative priorities, and attending the luncheon during which six members of Congress and staff were recognized for their outstanding support of American law enforcement.

At the luncheon, NAPO honored several members of Congress and staff for their tireless work on behalf of the law enforcement community.  NAPO is proud to have recognized these individuals:

Senator Toomey spoke to our members after receiving the award and you can view his speech here.

NAPO also gave awards to Brooke Jamison (Senator Kirsten Gillibrand, D-NY) for her tireless work on the James Zadroga 9/11 Health and Compensation Reauthorization Act, and Senator Barbara Mikulski (D-MD) for her steadfast commitment as a leader on the Senate Appropriations Committee to ensuring that state and local law enforcement have the resources and funding it needs to keep officers and the communities they serve safe.  Due to other commitments, Senator Mikulski and Ms. Jamison were unable to accept their awards in person.

In addition to our legislative award winners, Senator Amy Klobuchar (D-MN) and Congressmen David Jolly (R-FL) and Ken Buck (R-CO) attended the luncheon and spoke to our members about the importance of their work and the need to stand up for the law enforcement community.  Senator Klobuchar is leading the effort in the Senate to reauthorize the COPS Program, Congressman Jolly is the sponsor of the Thin Blue Line Act, and Congressman Buck is the sponsor of the Blue Lives Matter Act.  NAPO thanks them for taking the time to attend the luncheon and for their continued support of the law enforcement community.  NAPO also appreciates all of the staff who stopped by the luncheon and spoke with our members about the issues facing law enforcement today.

NAPO thanks all of our members who participated in the lobby day and legislative luncheon. Without their and the leadership of these Members of Congress, NAPO would not be able to accomplish all that we have since the beginning of the 114th Congress.  We look forward to continue working with these champions of law enforcement to ensure that state and local law enforcement get the support they need to efficiently and effectively protect our communities.

If you have any questions about the lobby day or the legislative luncheon, please contact Andy Edmiston at aedmiston@napo.org.

May 10th was a successful day for NAPO and our legislative priorities as the House and Senate took up and passed several NAPO-endorsed bills. NAPO, together with other law enforcement organizations, worked tirelessly with House and Senate leadership, Committee leadership and Members of Congress to ensure these bills would be acted upon.  In addition to the Bulletproof Vest Partnership Grant Program Reauthorization Act and the Fallen Heroes Flag Act, which were subsequently signed into law, the House and Senate passed the following bills:

This bill is currently being held in the House Education and Workforce Committee by the Chair, Congressman John Kline (R-MN).  He is hoping that it could be part of a larger higher education overhaul.  NAPO is working with members of the Committee to move this important legislation on its own and as soon as possible.

NAPO appreciates the support of the bill’s sponsor, Senator Bob Casey (D-PA), who worked with us on ensuring this important bill passed.

NAPO thanks the sponsor of the bill, Congressman Erik Paulsen (R-MN), for his commitment and support of the law enforcement community. NAPO is working with Senate leadership and the Finance Committee to move this common sense legislation.

NAPO continues to work to ensure that both the Children of Fallen Heroes Scholarship Act and the Recovering Missing Children Act are passed into law.  If you have questions about any of these bills, please contact Andy Edmiston at aedmiston@napo.org.

Every year since 1994, NAPO has presented the TOP COPS Awards® Ceremony. The purpose of the TOP COPS Awards® is to educate the American public about our nation’s heroes and to pay tribute to law enforcement officers in federal, state, county, tribal and local agencies from across the country for actions above and beyond the call of duty during the preceding year. Our TOP COPS® are nominated by fellow officers and selected from hundreds of nominations by an independent Awards Committee. Officers from the top ten cases have been chosen as the 2016 NAPO TOP COPS®.  This year, there are 26 TOP COPS® representing the top ten cases.  In each remaining state, one case has been selected from which an officer or group of officers will receive Honorable Mention awards.

NAPO was honored to have the privilege to recognize these courageous men and women during our 23rd Annual TOP COPS Awards® ceremony on May 14, 2016. Please join us in congratulating these heroes, who continue to put their lives on the line each and every day to keep our communities safe.

The list of all our of 2016 TOP COPS® and Honorable Mentions award winners can be found on NAPO’s website at: http://www.napo.org/top-cops/2016-win/