On October 15, 2014, as part of preparations for the arrival of the President at Newark Liberty Airport, the Secret Service demanded that the regularly assigned police officers of the Port Authority Police Department on the airport ramp be stripped of their firearms.  Upon learning of this action, NAPO immediately sent the attached letter to Acting U.S. Secret Service Director Joseph Clancy.

This action led to significant and unnecessary risk to the personal safety of these officers. A uniformed but visibly unarmed police officer is a prime target for physical assault or worse. This is particularly true in a dynamic and attention-getting environment such as the arrival of the president at a public airport.

The risk to the public was also greatly increased without reason by disarming the very men and women assigned to protect them, especially when those men and women are highly trained and experienced in the unique operational environment of an active international airport.

NAPO has requested that Acting Director Clancy look into this matter.  NAPO will keep our members updated as we learn more.  If you have any questions about this issue, please contact Bill Johnson at:  bjohnson@napo.org.

Prior to joining the Department of Justice, Gupta served as Deputy Legal Director of the American Civil Liberties Union and Director of its Center for Justice.  Previously, she was an attorney for its Racial Justice Program.  Gupta began her career as a lawyer with the NAACP Legal Defense and Educational Fund.  In addition to her work with the ACLU and NAACP Legal Defense Fund, Gupta has taught civil rights litigation and advocacy clinics at New York University School of Law since 2008.

NAPO President Tom Nee and Executive Director Bill Johnson participated in a conference call with the Attorney General before the appointment was announced.  NAPO will monitor that status of this “acting” appointment, but has initial concerns that Ms. Gupta lacks adequate law enforcement experience.

NAPO will keep our members updated on the status of this position.  If you have any questions about this appointment, please contact Bill Johnson at:  bjohnson@napo.org.

On October 17, 2014, NAPO sent letters of recommendation to the Chairmen and Ranking Members of the committees with jurisdiction on issues related to the Ebola virus.  NAPO recommended ways to inhibit the spread of the virus in the United States through travel restrictions and the implementation of new protocols for those responsible for addressing Ebola threats at airports.  (The letter is attached to this report for your convenience and review).

NAPO is very concerned for the safety of our first responders and the public that they protect.  We feel strongly that steps can be taken to prevent the spread of this disease.  To ensure the safety of our nation, we proposed the following actions to Congressional Committee leadership:  ban flights from affected nations; require that medical personnel traveling to and from the affected countries, as well as infected Americans traveling to the country for treatment, be transported by specially reserved and monitored designated aircraft; and institute a uniform national protocol among agencies (airport police; Customs and Border Protection; and EMS) responsible for addressing the Ebola threat at airports and other ports of entry.

Swift action must be taken to ensure the safety of our public and prevent the spread of this deadly virus.  The above actions will also help to instill confidence in travelers across the country.

Over the past week, NAPO participated in the following teleconferences, which included an in-depth summary of future actions and areas of research:

NAPO looks forward to continuing to work with DOJ leadership and fellow law enforcement stakeholders on this important project.  We will keep our members updated on the status of this initiative.  If you have any questions about NAPO’s efforts on the criminal justice review project, please contact Melissa Nee at:  mnee@napo.org.

NAPO continues to monitor developments on smartphone encryption that will inhibit law enforcement’s ability to gain access to information stored on such devices.  The following Washington Post article outlines FBI Director James Comey’s request for technology companies to provide investigators with ways to gain access to encrypted communications in order to ensure public safety and justice.  This article accompanies a multitude of recent publications regarding concerns related to new smartphone encryption policies.

FBI Director James B. Comey on Thursday called for the law to be changed to require technology companies to provide investigators with a way to gain access to encrypted communications, warning that without reform, Americans would see cases in which murderers, rapists and terrorists could more easily elude justice.

“I’m hoping we can now start a dialogue with Congress on updating” the law, said Comey, who has been increasingly vocal on the issue following last month’s announcement that Apple and Google are encrypting data on smartphones in a form that the companies cannot decrypt.

“We are not seeking to expand our authority to intercept communications,” Comey said, speaking at the Brookings Institution. “We are struggling to keep up with changing technology and to maintain our ability to actually collect the communications we are authorized to collect.”

The FBI calls the dilemma “Going Dark” because of a lack of visibility into suspects’ communications. Comey said Thursday that he understood that tech firms, in encrypting more communications, were responding to market pressures.

But, he said, “the post-Snowden pendulum” has “swung too far in one direction — toward fear and mistrust.” He called for a “national conversation” about the proper balance between liberty and security and about whether law enforcement agents armed with a warrant should be able to intercept a suspect’s communications — including phone calls and text messages — or obtain data such as photos and videos stored on smartphones.

“Have we become so mistrustful of government and law enforcement in particular that we’re willing to let bad guys walk away?” he said.

Comey described several cases in which access to text messages and other evidence obtained from cellphones enabled successful prosecutions, including of a sex offender who killed a young boy in Louisiana.

The FBI director said he wanted to see changes made to a 1994 law known as CALEA — for the Communications Assistance for Law Enforcement Act — so that companies such as Apple and Google have “an obligation to build a lawful intercept” capability into their phones or devices.

Currently only land-line and cellphone companies, broadband services and Internet phone services that connect with traditional phones are covered by CALEA. That leaves out online and peer-to-peer services, and a host of applications that provide text messages and chat services over the Internet.

Comey said he was not seeking a “universal” encryption key, which is a proposal that in the 1990s engendered fierce debate and was killed. Nor, he said, was he seeking a “back door” to allow authorities access.

The bureau wants providers to be required to build a capability in to their products or services, rather than retroactively creating means of access. “We want to approach the front door,” he said. That, he said, should minimize risks of vulnerabilities being introduced that can be exploited by hackers or foreign governments.

A renewed effort to revise the law will face strong headwinds. But, he said, “I think now it’s an opportunity to . . . stand in that wind a little bit and have that conversation.”

Laura W. Murphy, director of the Washington legislative office of the American Civil Liberties Union, said: “Whether the FBI calls it a front door or a back door, any effort by the FBI to weaken encryption leaves our highly personal information and our business information vulnerable to hacking by foreign governments and criminals.”

Altering CALEA to address Comey’s concern, tech experts say, would mean gutting a provision that permits companies to offer services that are encrypted with a key that they do not hold, and thus cannot decrypt. Experts say that such systems are far more secure.

If a company holds the keys, someone other than law enforcement could steal them, said Phil Zimmermann, who created Pretty Good Privacy encryption in 1991 and was nearly prosecuted for it. “Someone could break into that server and get millions of those keys,” said Zimmermann, who co-founded Silent Circle, a company that provides encrypted voice calls and text messages and does not hold a decryption key. “They become an attractive nuisance.”

Albert Gidari Jr., a partner at the law firm Perkins Coie who represents tech firms, said it isn’t the job of any company to make surveillance easier. “When we accept the premise that full access to everyone’s communications is required,” he said, “there will be no end to access government can demand to your smart home, smart car, and so on, just because a bad guy somewhere might use such a device in furtherance of a crime.”

The bureau, officials said, does not have any legislative proposal drawn up.

NAPO is closely monitoring these developments, and will keep our members updated on any pending legislation related to this issue.  If you have any questions, please contact Melissa Nee at:  mnee@napo.org. 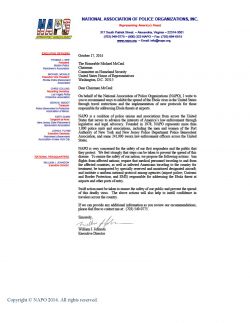 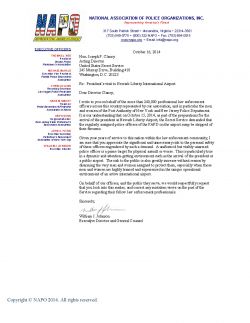