On August 5, 2014, NAPO met with senior staffers for Congresswoman Eddie Bernice Johnson (D-TX) and Congressman Kenny Marchant (R-TX) to outline our top legislative priorities, which include the following initiatives:

Driver’s Privacy Protection Act Amendment:  NAPO has proposed modifications to the most recent amendment to the Driver’s Privacy Protection Act (DPPA).  The DPPA requires state motor vehicle departments to receive permission from individuals before their personal motor vehicle record may be sold or released. The most recent DPPA amendment authorizes a private right of action for knowing violations, and a court may award damages in the amount of $2,500 for each time a record was accessed, as well as attorney fees and other litigation costs.  Law enforcement officers are subject to these stringent punishments, even if they did not review files with criminal intent.

NAPO appreciated the opportunity to meet with both of the staffers, and looks forward to continuing to work with them in the future.  If you have any questions about any of the issues summarized above, please contact Melissa Nee at:  mnee@napo.org

NAPO has sent the attached letter of support for the Fairness for Fallen Officers Act (S. 2332), which was introduced by Senator Chris Coons (D-DE) and Senator Rob Portman (R-OH) on May 14, 2014.  This bipartisan legislation will close an unintended loophole in the Public Safety Officers’ Benefits (PSOB) program, and ensure families of fallen officers receive the benefits they deserve.

A House bill to authorize Customs and Border Protection (CBP) for the first time was approved last week.  CBP had not received Congressional authorization for its operations since its creation within the Department of Homeland Security (DHS) in 2002.

The bipartisan CBP authorization legislation (H.R. 3846) would authorize border, maritime, and transportation security responsibilities and functions in DHS and the establishment of CBP. It would also clarify authorities of the CBP commissioner.

“As an agency with more than 44,000 Federal law enforcement officers, it is critical that Congress provide greater transparency, accountability and oversight to CBP on a routine basis. Authorizing the Department and its components like CBP remains my top priority for the Homeland Security Committee. Next Congress, I intend to lead the first ever DHS authorization through regular order in partnership with my fellow chairmen,” said Chairman McCaul.

Last week, NAPO sent endorsement letters to candidates for upcoming elections across the United States.  Many of the candidates have recognized and thanked NAPO for our support.  We look forward to working with each of the candidates on their campaigns in the coming months.

If you have any questions about NAPO’s endorsements, please contact Bill Johnson at:  bjohnson@napo.org. 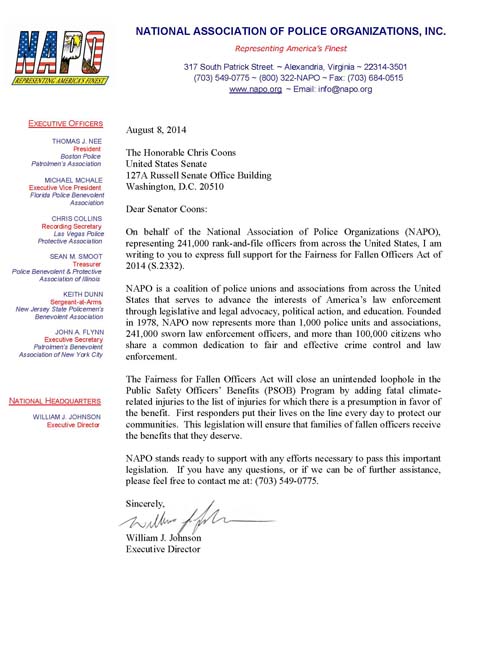