On October 2, 2014, NAPO sent a letter to the President of Goddard College urging him to revoke the invitation to Mumia Abu-Jamal, an unrepentant cop-killer, to deliver the college’s fall commencement speech.  (The letter is attached to the end of this report for your review).

NAPO is shocked and outraged by the decision to invite a convicted cop-killer to deliver a commencement address.  Abu-Jamal was convicted of murdering Philadelphia Police Officer Daniel Faulkner in 1982. After shooting Officer Faulkner in the back, Abu-Jamal shot the defenseless officer in the face.  Officer Faulkner’s family and fellow officers continue to grieve over this loss, as Abu-Jamal refuses to express any remorse for the cold-blooded murder of an honorable police officer.

The decision to invite this murderer to deliver a college commencement address is appalling.  It is disrespectful not only to Officer Faulkner’s family, but also to members of the law enforcement community who put their lives on the line everyday to keep our nation safe.

We encourage you to contact Goddard College to express your thoughts on this issue.  If you have any questions, please contact Bill Johnson at:  bjohnson@napo.org.

Please complete the registration form attached to this report and return the document to NAPO attention: Elizabeth Loranger by October 10.  Fax to (703) 684-0515 or email to eloranger@napo.org.

Attorney General Eric Holder and Director Ron Davis of the Office of Community Oriented Policing Services (COPS) announced the department's latest effort to strengthen community policing through hiring grants that will fund nearly 950 officers at 215 law enforcement agencies in cities and communities across the country.  This year’s $124 million in awards place a special emphasis on increasing community policing, bolstering crime reduction, and making the streets of America safer.

Due to NAPO’s efforts, several of our member localities were among the top recipients of grants.  For the entire list of grantees and additional information about the 2014 COPS Hiring Program, visit the COPS website at www.cops.usdoj.gov.

“These targeted investments will help to address acute needs – such as high rates of violent crime – funding 75 percent of the salary and benefits of every newly-hired or re-hired officer for three full years,” said Attorney General Holder.  “The impact of this critical support will extend far beyond the creation and preservation of law enforcement jobs.  It will strengthen relationships between these officers and the communities they serve, improve public safety, and keep law enforcement officers on the beat.”

“The COPS Office is pleased to assist local law enforcement agencies throughout the country in addressing their most critical public safety issues,” said Director Davis.  “Funding from this year’s program will allow many cities and counties to focus newly sworn personnel on issues related to violent crime, property crime, and school safety.”

The COPS Hiring Program offers grants to state, local, and tribal law enforcement agencies to hire or rehire community policing officers.  The program provides up to 75 percent of the approved entry-level salaries and fringe benefits of full-time officers for a 36-month grant period, with a minimum 25 percent local cash match requirement and a maximum federal share of $125,000 per officer position.

Grantees for the 2014 hiring program were selected based on their proposed community policing strategies, fiscal need, and violent crime rates.

To date, the COPS Office has funded more than 125,000 officers serving over 13,000 state, local, and tribal law enforcement agencies, in jurisdictions both large and small.  More than 700,000 people – including government leaders, community members, and police officials – have received training through COPS-funded organizations.  Since its inception in 1994, the COPS Office has provided roughly $14 billion to put additional officers on the streets, to provide technical assistance and training, to enhance crime fighting technology, and to support cutting-edge crime prevention initiatives.

If you have any questions about the 2014 grants or NAPO’s relationship with the COPS Office, please contact Melissa Nee at:  mnee@napo.org.

NAPO attended a law enforcement roundtable discussion, hosted by the Coalition Against Bigger Trucks (CABT), on September 30, 2014.  The meeting provided an opportunity for stakeholders to discuss a soon to be released U.S. Department of Transportation (D.O.T.) study, which provides information on highway safety and truck crash statistics.  The stakeholder group expressed concerns that the study does include comprehensive crash data; lacks attention to vehicle dynamics; and fails to include law enforcement feedback.

NAPO also accompanied the stakeholder group to Capitol Hill meetings on October 1, 2014.  NAPO joined fellow stakeholders in meetings with senior staffers for Congressman Jim McGovern (D-MA) and Congressman Lou Barletta (R-PA), as well as senior staffers for the following Committees:  Senate Appropriations Committee’s Subcommittee on Transportation, Housing, and Urban Development, and Related Agencies; Senate Commerce, Science, and Transportation Committee; Senate Committee on Environment and Public Works; and the House Transportation and Infrastructure’s Subcommittee on Highways and Transit.  The stakeholders used each of the meetings to express concerns regarding the aforementioned U.S. D.O.T. study.  The group also offered recommendations for improvements to the study, which include:  compiling uniform reporting of crash data; conducting off-road operating tests of bigger truck configurations; and integrating law enforcement feedback into the study.

NAPO appreciated the opportunity to be included in both the roundtable discussion and Hill meetings, and we look forward to continuing to work with the CABT in the future.  If you have any questions about these meetings, please contact Melissa Nee at:  mnee@napo.org.

On October 2, 2014, NAPO met with a senior staffer for Congressman Steve Israel (D-NY).  NAPO used the meeting to outline our top legislative priorities, which include the following initiatives:

NAPO appreciated the opportunity to meet with the staffer, and looks forward to working with Congressman Israel in the future.  If you have any questions about any of the issues summarized above, please contact Melissa Nee at:  mnee@napo.org.

On October 1, 2014, NAPO participated in a teleconference with Senator John Cornyn’s (R-TX) staff to discuss strategies to move the Justice for Victims of Trafficking Act forward.  This bill, sponsored by Senator Cornyn, was passed by the Senate Judiciary Committee on September 18, 2014 as an amendment.  This legislation will boost support for and protection of victims of human trafficking by increasing law enforcement resources, enhancing victims’ services, and increasing penalties in an effort to combat child sex trafficking, child pornography, sexual exploitation, and human trafficking. 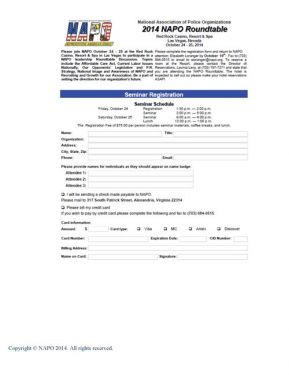 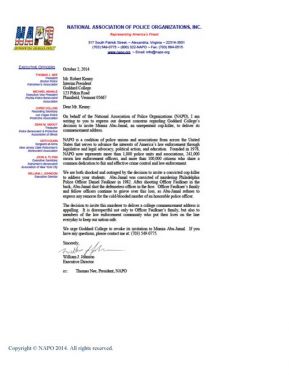